Charles Geshekter is an emeritus professor of African history at California State University, Chico. He is a three-time Fulbright Scholar and served as board chairman of the California Association of Scholars. 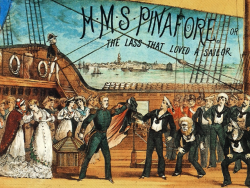 Anytime someone praises Critical Race Theory (CRT) as a valuable interpretation of racism in America, it reminds me of a scene from the comic opera H.M.S. Pinafore. It’s when Little Buttercup sings, “things are seldom what they seem; skim milk masquerades as cream.” Buttercup would urge us to think critically about the masquerade of insinuations […]