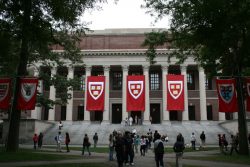 Faculty Ousted at Harvard – From Power, That Is

The ills besetting higher education in recent years – ballooning tuitions, kangaroo disciplinary tribunals, speech codes and other violations of academic freedom, expanding bureaucracies, invasions of student and faculty privacy, lowered academic standards, and others – are on virtuallyeveryone’s minds. However, these problems are not mutually exclusiveand severable; rather, theyare manifestations of a larger downward […]

I spoke with a colleague yesterday, a long-term staff member at Northwestern University. She told me that when Northwestern students report a rape, they are being told something like this: “If you report the incident to local police, they might not take you seriously. Your name will get in the newspapers. When the case goes […]

Another Victory for FIRE

The Foundation for Individual Rights in Education (FIRE) has just scored yet another victory for free speech. In a sadly familiar case, the University of Hawaii at Hilo prevented students Merritt Burch and Anthony Vizzone from handing out copies of the US Constitution. A UH adminstrator told them they could only conduct such advocacy in […]

"Democrat Rep. Charlie Crist, fearing the new culture wars over education could strain his bid for Florida governor, is appealing directly to parents over an issue that has rattled Democrats across the county. 'Parents for Crist,' a group he unveiled last week, will shape his campaign in coming months. ... Crist’s move is a clear attempt to boost his chances in the wake of Virginia’s big November upset, where Republican Glenn Youngkin trounced Democrat Terry McAuliffe in part by tapping into parents’ anger with local school boards over issues like mask mandates and critical race theory." - Politico, 1/25/22

"Virginia attorney general Jason Miyares has fired the top lawyers at George Mason University and the University of Virginia, The Washington Post reported. Counselors for the two public universities are appointed by the attorney general. Tim Heaphy, former counsel for the University of Virginia, was on leave to investigate the Jan. 6, 2021, insurrection at the U.S. Capitol before Miyares dismissed him. Victoria LaCivita, a spokesperson for the attorney general’s office, called Heaphy’s hire controversial and said that former Democratic attorney general Mark Herring had 'excluded many qualified internal candidates when he brought in this particular university counsel.' Heaphy’s dismissal was not related to his current investigation, the spokesperson said." - Inside Higher Ed, 1/25/22

Put Down Your No. 2 Pencils. Forever.

"The SAT will soon be taken exclusively on a computer, the College Board announced on Tuesday, ending an era in which high schoolers have had to make sure their No. 2 pencils were sharpened and their answer bubbles were completely filled in. The exam, which students will complete on laptops or tablets at testing centers, will also be shortened from three hours to two hours. The changes will begin in 2024 in the United States and in 2023 in other countries. The College Board is trying to retool the exam that has stressed out millions of students in the face of questions about whether college admissions tests are fair, or even necessary." - New York Times, 1/25/22

"Pandemic-induced school closures underscored the conflict of interest between teacher unions and students. Strong union districts had less in-person instruction, which hit minority communities in urban centers especially hard. The power to determine the mode of instruction belies the notion that the U.S. Supreme Court put public-sector unions on a road to extinction with its 2018 decision in Janus v. AFSCME. The Janus decision undoubtedly dented the power of such unions by declaring unconstitutional the collection of agency fees from workers who refuse to join their local union but are still represented by it. But the impact of the court’s decision has been blunted by new state laws to boost the unions’ fortunes." - The Hill, 1/25/22

"The Supreme Court on Monday decided to wade back into the nation’s decades-long debate over the consideration of race in college admissions by agreeing to hear two cases brought by an anti-affirmative-action group against Harvard College and the University of North Carolina at Chapel Hill. The group, Students for Fair Admissions, alleges both institutions discriminated against Asian American applicants in their admissions processes. The outcome of the two cases, which the court consolidated on Monday, could have major implications for colleges and universities — both private and public — that consider race when deciding how to admit students." - Chronicle of Higher Education, 1/24/22

‘In the End, You’re Treated Like a Spy,’ Says M.I.T. Scientist

"Last week, the government dismissed the case against Dr. Chen, which alleged that he had concealed seven Chinese affiliations in applications for $2.7 million in grants from the U.S. Energy Department. Prosecutors announced that they had received new information indicating that Dr. Chen had not been obliged to disclose those affiliations, undercutting the basis of the case. ... The dismissal is a setback to the China Initiative, an effort started in 2018 to crack down on economic and scientific espionage by China." - New York Times, 1/24/22

"The chief executive of a Wisconsin-based law firm will take over as president of the University of Wisconsin System beginning June 1, its regent board announced Friday. Attorney Jay Rothman, chair and CEO of the Milwaukee law firm Foley & Lardner, will helm one of the most prominent public higher education networks in the U.S. despite not having any experience in postsecondary administration. Rothman beat out the chancellor of the University of Wisconsin-Eau Claire, the other finalist for the position, matching the trend of some institutions seeking to recruit leaders from outside academe." - Higher Ed Dive, 1/24/22

"A former professor appointed to review Texas’ social studies standards should be removed from the panel because of conspiracy theories he’s promoted, an advocacy group urged on Monday. The Texas Freedom Network, which keeps tabs on moves that impact what’s taught in schools, called on the State Board of Education to withdraw the appointment of Stephen Balch from a panel providing feedback on the social studies curriculum." - Dallas Morning News, 1/24/22

Is the US higher education bubble about to burst?

"There appears to be a growing skill-mismatch between the degrees pursued by students and those actually sought by employers. Additionally, U.S. productivity growth has remained subdued even as the share of workers with college degrees has risen. Various structural factors have also affected the returns to college education in recent decades. The sustained high demand for college education resulting from misaligned incentives, misguided policies and societal pressures has led to a U.S. higher education sector that is characterized by runaway expenses, administrative bloat and less-than-ideal admissions policies. It may be time to burst the higher education bubble." - The Hill, 1/24/22

"The epidemic of mental illness in students is growing. The newest statistics from the U.S. Surgeon General report that adolescents experiencing depressive and anxiety symptoms have doubled during the COVID-19 pandemic, with 25% experiencing depressive symptoms and 20% experiencing anxiety symptoms. These statistics are frightening, but the good news is that schools are not helpless in this crisis. This School Choice Week (Jan. 23–29), let’s remember that there are simple, tangible steps that teachers, school counselors, and administrators can take to mitigate the mental health challenges children face." - RealClearEducation, 1/24/22