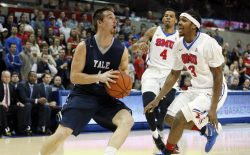 Jack Montague, captain of Yale’s basketball team, has been expelled from the university on some sort of sex charge and the story continues to get uglier. Since his family has basically declined to comment (for understandable reasons) and because Yale chooses (for incomprehensible reasons) to employ “a more expansive definition of sexual assault” than state […]

A Better, Feminist Relationship With Your Glacier?

This has been a big week for feminist glaciology, that is, the possibly revolutionary application of feminist (and post-colonial)  theory to glaciers. Four University of Oregon researchers produced the 15,000-word paper for the journal Progress in Human Geometry. Steven Hayward who apparently discovered the study, wrote, “This is why you get Trump”  on Power Line. […]

"UNC’s list of undergraduate programs includes a minor in social and economic justice. Given its name, one might expect such a program to provide students with insights into economics, public policy, and issues of rights and justice from a social-science perspective. Perhaps such a program could help students prepare for careers in law, politics, or journalism, or generally nurture the development of sharp and politically engaged young adults. However, in stark contrast to an outsider’s likely expectations, the minor’s course list is primarily composed of classes concerning intersectionality and social activism. It exhibits a startling lack of economics coursework." - James G. Martin Center for Academic Renewal, 8/11/22

"Most Americans have been conditioned to accept some level of incompetence and inefficiency from government – but not to the extent that federal employees paid by our tax dollars simply admit that they are fundamentally incapable of doing their jobs. Yet shockingly, this is what we are now witnessing with the Department of Education’s failed and convoluted attempt to process claims for student loan cancellation." - RealClearEducation, 8/11/22

"The U.S. Department of Education is slow to identify when a college closes and doesn’t always provide students information they will need to obtain a closed-school discharge of their federal loans, a searing new report from a congressional watchdog found. The department took two months or more to identify a third of the colleges that closed between 2010 and 2020, according to the report, which the U.S. Government Accountability Office released Wednesday. It took six months or more to identify 13% of closures in that time frame, amounting to 135 institutions." - Higher Ed Dive, 8/10/22

The Unclear Future for Gifted-and-Talented Education

"Will gifted-and-talented school programs still exist in five years? Controversy has ramped up around the longtime practice of providing accelerated classes for selected students. Racial-justice movements highlighted inequalities, prompting changes in districts across the nation. Lawsuits related to these programs are pending in states including Virginia, Missouri and New York." - Wall Street Journal, 8/10/22

"A survey of more than 300 officials at American colleges shows many are planning for long-term growth in online education, but few are consistently evaluating the quality of their mushrooming course lists. According to a newly released report on the survey’s findings ... more than 90 percent of the 'chief online officers' surveyed said they expect the typical traditional-age undergraduates on their campus would be taking courses in some kind of hybrid format by 2025. That’s a stark departure from just three years ago, before the pandemic, when 20 percent of such undergrads took hybrid courses." - Chronicle of Higher Education, 8/10/22

The Reopening of the American Mind

"In 1987, philosopher Allan Bloom published The Closing of the American Mind, a book critiquing higher education in America. ... Over three decades later, moralistic assaults on the American political traditions of constitutional neutrality, rationalism, freedom, and equality under the law have not dissipated. Attacks on free speech have particularly intensified, manifesting as both 'cancelation' of dissenting individuals and self-censorship." - James G. Martin Center for Academic Renewal, 8/9/22

"Colleges have considered applicants’ race in admission decisions for decades. Starting next year, that could be curtailed or even illegal, depending on the outcome of cases before the Supreme Court. So college-admissions officials are rushing to figure out what it would mean to enroll a diverse class of students if the law changes. They say that would mean widening recruiting efforts, looking more closely at applicants’ backgrounds and proactively offering spots to students before they even apply." - Wall Street Journal, 8/9/22

The Exodus From Public Schools

"As parents prepare to send their children back to school, many will have made decisions about their child’s education that will not only put them on a different trajectory, but also impact the public education system, which is being used in too many districts to indoctrinate more than educate. Stories about drag queens in kindergarten, forcing students to use preferred pronouns, biological boys who say they are transgender using locker rooms and showers once reserved for girls, along with the pandemic, which convinced growing numbers of parents that homeschooling worked better—all of these are prompting an exodus of parents and now teachers from public schools." - Daily Signal, 8/9/22

"After hypocritically ranting about the threat to 'academic freedom' posed by Lt. Gov. Dan Patrick’s higher education reform proposals, the faculty and administration at the University of Texas–Austin appear poised to end the remaining vestiges of free expression and free inquiry at our institution. The university’s 'Diversity, Equity, and Inclusion' (DEI) policy – which already requires that those seeking hiring and promotion demonstrate political commitment to critical race theory and radical gender ideologies – will now be 'sharpened,' apparently to include mandatory 'diversity' statements from job applicants." - RealClearEducation, 8/9/22

"It's not that chief online officers expect that fully online education will dominate; they see a blended future, in which both exclusively face-to-face and exclusively online students will be outliers by 2025. Instead, most students will take courses based in classrooms that have significant digital components, or classes delivered mostly online that have residential components." - Inside Higher Ed, 8/9/22