Max Stern, the lawyer for the expelled Yale basketball captain Jack Montague, has spoken out, announcing that he will sue Yale on behalf of Montague in April, and clarifying some details in the case, including a very surprising one: that the aggrieved female did not file the sexual misconduct complaint. In his telling, Montague had sex with the woman four times and the woman says only the fourth time was non-consensual.

The Stern statement said, “On the fourth occasion, she joined him in bed, voluntarily removed all of her clothes, and they had sexual intercourse. Then they got up, left the room and went separate ways. Later that same night, she reached out to him to meet up, then returned to his room voluntarily, and spent the rest of the night in his bed with him”

The accuser waited around a year to speak to someone from Yale’s Title IX office, but decided not to file a complaint with Yale. But the Title IX officer filed a complaint. A disciplinary hearing occurred, amidst a campus frenzy following a survey suggesting that the New Haven campus was a hotbed of violent crime.

The indication that the Title IX officer—not the accuser—filed the charges should have triggered outrage on the Yale campus. The Title IX coordinator has authority under Yale’s procedures to file a complaint independently. But according to the regular Spangler Reports on campus sexual misconduct (my review of the most recent report is here), such a move is supposed to occur only in “extremely rare cases,” and only when “there is serious risk to the safety of individuals or the community.” Stephanie Spangler herself reaffirmed this point in February, telling the Yale Daily News, “Except in rare cases involving an acute threat to community safety, coordinators defer to complainants’ wishes.”

There is nothing in the facts as described by Stern that remotely fits these criteria. So why did the Title IX coordinator act? Did Montague’s status as a high-profile basketball player account for the decision? Was she, for instance, fearful of negative publicity from following Yale’s own guidelines? Or was she worried about the fallout from a recent AAU survey, which had generated negative publicity for the school?

Or perhaps it’s simpler than that: The Title IX office seems to have a custom of not following the restrictions laid out in the Spangler Report. Here’s a chart using data in the Spangler Reports, involving allegations of sexual assault of Yale undergraduates. (I have updated cases originally listed as “pending” when follow-up information was provided in a subsequent report. 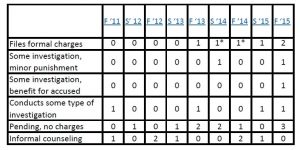 In the two starred 2014 cases, the accused student was found not guilty. Given Yale’s stated criteria—“extremely rare cases” involving “acute threat to community safety”—it should be all but inconceivable that any case filed by the Title IX officer ended with a not-guilty finding. That two did suggests that she had ceased following Yale’s own standards even before the Montague case.

(Despite these not-guilty findings, the accused student in both of those cases received what amounted to minor punishment—a no-contact order, which could have academic consequences by limiting course offerings. In two Title IX officer-filed cases, in fall 2011 and spring 2012, there were allegations of physical, but not sexual, violence involving couples that previously had a sexual relationship.)

The pattern here is obvious: the Title IX office has gradually become more and more aggressive in filing charges, culminating in the three cases in which charges were filed in the 2015 academic year, despite the supposed restrictions on the types of cases the office can file. So: has the Title IX coordinator decided that Yale’s own regulations don’t apply to her?

Richard Bradley, probably too hopefully, suggested that this might be the case that prompts the fair-minded to recognize that cases such as this should be handled by the police. But for now, they’re still handled by secret university tribunals that deny due process to the accused.

Some in the media, however, appear to be hearing the message. Both the Daily News and the New York Post had powerful editorials condemning Yale’s handling of the case. Montague’s high school coach, Dennis King, invoked the witch-hunt metaphor, and added that he knew of no player “more dedicated to self-improvement, more single-minded in his love of the game, or more committed to his teammates.” And Montague himself attended the Yale NCAA games in which, but for Yale’s procedures, he would have played.

Related: Worst College President of 2015, Who Wins the Sheldon?

Perhaps because of this public pressure, Yale issued a statement defending its approach to campus sexual assault. Most of the press release was boilerplate, but one section was interesting—stressing that most students accused through Yale’s procedures don’t wind up being expelled. This passage telegraphs the university’s likely defense, borrowing from the standard pioneered by Judge Furman in the Columbia case—since the university doesn’t find all accused students guilty, it shouldn’t be vulnerable to any Title IX challenge, and the courts should wholly defer to its unfair procedures.

Writing in the Washington Post, Shanlon Wu, a former federal sex crimes prosecutor, placed these stats in context: “What would be far more telling would be the percentage of Yale’s campus sexual assault allegations that go forward to hearings. Sending nearly every college student accused of campus sexual assault to a hearing is an abdication of responsibility. Colleges and universities owe it to their students to review and investigate each allegation of sexual assault professionally and thoroughly — prior to sending it forward to a panel hearing. While every case deserves investigation, not every case deserves a hearing.” He also took note of the fact that the “training” Yale provides its disciplinary panelists remains secret.

In the aftermath of 30 for 30’s “Fantastic Lies” documentary profiling the Duke Lacrosse case, it’s hard not to focus on the differences in the campus atmosphere between then and now. During the lacrosse case, the students were the voices of reason—from the student government, to the student newspaper, to students who registered to vote against Mike Nifong. And perhaps the highest-profile student action came from the Duke women’s lacrosse team, in the 2006 national semifinals, who said nothing but wore armbands with the number 6, 13, and 45—the numbers of the three falsely accused men’s players.

Doubtless the Brodhead administration did not welcome this move—the Duke president, after all, had a month before suggested privately that a movie in which an accused murderer fooled his lawyer into believing his innocence was a good frame for the case. But Duke allowed the silent statement to proceed. And students in general were either supportive of or neutral toward the women’s lacrosse team members.

In 2016, the Yale men’s basketball team made a nearly identical, silent statement. They said nothing, but wore warm-up shirts with Montague’s number and nickname. Here, however, the campus backlash was furious. Unidentified students posted flyers accusing the team of defending “rapists.” Yale’s dean issued a statement that seemed to condemn the basketball team. Student reaction toward the team seemed overwhelmingly negative. And the team then issued a statement that came across as a written version of a hostage video, filled with buzzwords more common from Title IX officials than a typical college student, apologizing to the campus community.

There’s scant reason to believe that the Yale Daily News is up to the task that the Duke Chronicle performed so ably in the lacrosse case. Rather than examine whether the basketball players were inappropriately pressured to issue the hostage-video statement—and, if so, what such pressure would say about the intellectual environment at Yale—a long article in Monday’s Daily News broke the news that members of the team still spoke with Montague.

But such standards—which essentially conflate the experiences of battered women in long-term relationships, who are often emotionally and financially dependent on the men who abuse them, with college students who engage in brief sexual relationships—render it impossible for any accused student to defend himself. If any behavior or evidence undermining the credibility of the accuser (who often, as appears to be the case here, is the only witness suggesting the accused student did anything wrong) can be dismissed as typical conduct of a “victim,” then all behavior confirms the accusation, and the accused must be found guilty.

KC Johnson is a history professor at Brooklyn College and the City University of New York Graduate Center. He is the author, along with Stuart Taylor, of The Campus Rape Frenzy: The Attack on Due Process at America's Universities.