(A note on the correct use of language. Women are justifiably offended when people, especially a man, refers to them as “girls.” I do not do that in this essay. The title of this essay is based on the fact that, as described below, it is skills and interests that develop as girls that lead girls who only later become adult women down different paths that contribute to adult women being less likely to work in STEM).

The go-to explanation for the gender gap in STEM is bias.  Old fashioned sexism, “implicit” (or unconscious) sexism, “obstacles,” stereotypes, and the like.

There are many problems with such explanations, including but not restricted to:

The purpose of this blog entry is not to evaluate whether discrimination against women and girls “exists,” because it surely does under some conditions and in some contexts.  Instead, the purpose is to explore two questions: Is it possible that something other than discrimination is the main source of gender gaps in STEM? And is it possible that scientists cherry-pick evidence to support narratives of bias?

Things versus people.  Su et al (2009) performed a meta-analysis of studies including a total of over 500,000 people examining gender differences in interests.  Despite claims that gender differences are typically “small” (Hyde, 2005), Su et al found a gigantic gender difference in interests.  Women preferred working with people, whereas men preferred working with things, a preference that is detectable within the first two days of birth and among our close species relatives, rhesus monkeys!  To be sure, these differences were not absolute.  Not every man prefers working with things and not every woman prefers working with people.  But the effect size was d= .93, and even if you are not familiar with effect sizes, this would make it one of the largest effects in social psychology; it is gigantic.

JUST math skills versus math and verbal skills.  This same issue of differing interests was approached in a different way by Wang, Eccles, and Kenny (2013). Disclosure: Eccles was my dissertation advisor and long-term collaborator; I am pretty sure she identifies as a feminist, has long been committed to combating barriers to women, and is one of the most objective, balanced social scientists I have ever had the pleasure to know.

In a national study of over 1,000 high school students, they found that:

Here are their conclusions, in their own words:

To be clear, neither Wang et al nor I am arguing this is the only reason for the gap in STEM; and neither Wang et al nor I have argued that there are no biases against girls and women. Nonetheless, it is also worth noting that the words “bias,” “discrimination,” and “obstacle(s)” do not appear anywhere in their article.  “Sexism” also appears nowhere in their text, though it does appear in one of their references.

The Council of Graduate Schools puts out regular reports, such as this one, that includes the gender distribution in various fields. 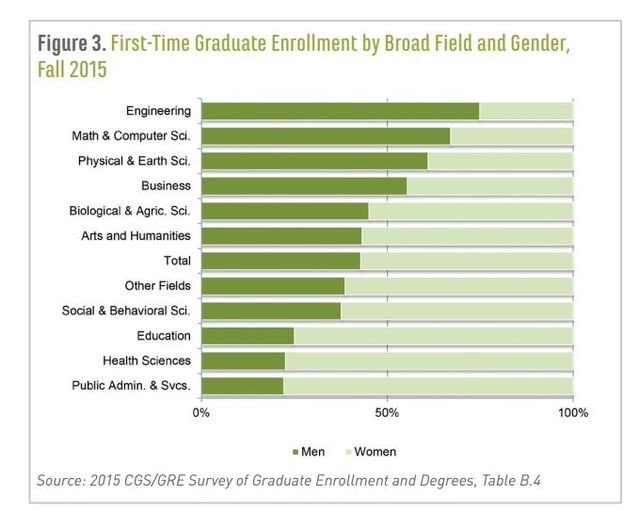 Lo and behold, there is no “pervasive evidence of” a gender gap in graduate enrollments, though there is a gap in some STEM fields. Completely consistent with the work by Su et al and by Wang et al, in nearly all fields that are about people, not only is there no gap disadvantaging women, there are actually more women than men! (Health, education, social and behavioral sciences, public administration, arts and humanities, and even biological sciences).  The same report found that, overall, across all fields, the “gap” is in the “wrong” direction: 57 percent of enrollees in graduate programs are women.

Furthermore, this pattern is completely consistent with the idea that girls and women have different interests (Su et al) and skills (Wang et al) that lead them to prefer non-STEM careers.

Surely girls and women have, historically, been discriminated against in such fields.  But discrimination in 1950 or 1970 does not constitute evidence of ongoing discrimination.  Furthermore, the evidence that girls and women prefer non-STEM fields is not an argument to avoid combating sexist discrimination where it can still be found.  Nonetheless, the list of social science victim2 groups is so long, that, most likely, almost all of us have been the target of discrimination or hostility at some point in our lives, rendering the question of whether some groups are more victimized than others muddier than it seems.

However equivocal the evidence for “bias” in the present may be an explanation for the gender gap in STEM fields, there is ample evidence of bias. Scientific bias! Social scientists clearly “prefer” bias explanations over other, deeply important, scientifically rigorous, social developmental evidence, such as that offered by Su et al and Wang et al.  This table reveals just how extreme this bias is: 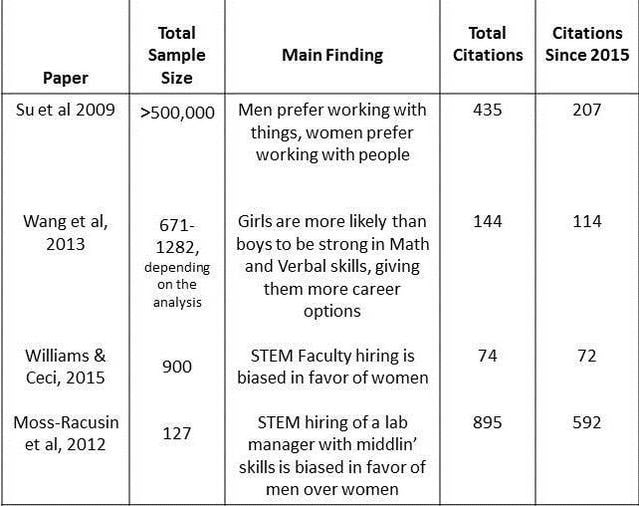 The key entry here is the citation counts in the far right.  The Moss-Racusin study is, by conventional standards, the weakest of the studies.  Its sample size is a fraction of that of the others.  It studies a relatively minor situation (hiring lab managers).  It was a single study (Su et al is a meta-analysis of scores of studies; Williams and Ceci reported five separate studies).  In contrast to Wang et al, it only studied an event at a single time point; it did not follow people’s career trajectories.

This does not make Moss-Racusin et al a “bad” study; it is merely weaker on virtually all important scientific grounds than the others.  This is not to argue that the other studies are “perfect,” either; all studies have imperfections.  But by conventional scientific standards, Su et al’s meta-analysis, the replications in Williams and Ceci, the longitudinal Wang et al study, and the far larger sample sizes in all three mean that, on most scientific methodological standards, they are superior to the Moss-Racusin et al study.

And yet, look at the citation counts.  Others are citing the Moss-Racusin et al study out the wazoo. Now, Wang et al and Williams and Ceci came out later, so probably the most useful column is the last.  Since 2015, the weaker Moss-Racusin study has been cited 50% more often than the other three combined!  That means there are probably more papers citing the Moss-Racusin et al study and completely ignoring the other three than there are papers citing even one of the other three! What kind of “science” are we, that so many “scientists” can get away with so systematically ignoring relevant data in our scientific journals?

(Again, this does not make the Moss-Racusin study “bad.” The bias here reflects a far broader field problem, it does not constitute a weakness in the paper itself).

And that, gentle reader, is a gigantic scientific bias.  It might even be beyond bias. Some might call it an “obsession” with discrimination and bias so severe that it is blinding many in our field to major findings regarding gender differences that contribute to preferences for different types of fields.

If this analysis has any validity, the societal push to equalize gender distributions may be deeply dysfunctional, because it can succeed only by having the perverse effect of pushing people into fields they do not prefer. Of course, on moral grounds, we want to ensure that all people have equal opportunities to enter any particular career.  But if there are bona fide gender differences in preferences and interests, equal opportunities may never translate into equal outcomes.

Lee Jussim, Ph.D., is a professor of social psychology at Rutgers University and was a Fellow and Consulting Scholar at the Center for Advanced Study in the Behavioral Sciences at Stanford University (2013-15).