Home » Articles » Why Is a College of Criminal Justice Celebrating Art By Guantanamo Jihadists?

Why Is a College of Criminal Justice Celebrating Art By Guantanamo Jihadists?

In the sunken lobby of John Jay College of Criminal Justice on Tenth Avenue in New York City, a somber Memorial Hall is dedicated to the “Bravery and Sacrifice” of “NYPD Heroes 9-11 and Beyond.”  Surrounded by photographs of the attack and the recovery, a twisted metal chunk of one of the Twin Towers rests on a circular black pedestal inscribed with the names of John Jay alumni killed in the attack.

Take the elevator to the sixth-floor offices of the college president, however, and the mood changes.  There you will find in “The President’s Gallery” a celebratory exhibit of art created by the friends and allies of the 9-11 terrorists.  The show, running to January 26, is titled “Ode to the Sea: Art from Guantánamo Bay.”  It is attracting quite a bit of attention.  While I was there I ran into a film crew from CBS arranging a tour with one of the curators, Erin Thompson.  A fellow exhibit attendee offered the CBS folks the perspective of—her words—“the mother of a victim of 9-11.”  Her son (or perhaps daughter) was one of the 648 employees of the Wall Street trading firm Cantor Fitzgerald, who were on the 101st to 105th floors of the North Tower that day.

No Repentance for Monstrous Acts

“Ode to the Sea” presents 31 paintings, three model boats, and one assemblage titled “The Hall of Enlightenment,” which combines a stopped clock and an open book.  The title of the exhibit is taken from the title of a poem by one of the inmates, Ibrahim al-Rubaish.  It begins:

O Sea, give me news of my loved ones.

Were it not for the chains of the faithless,
I would have dived into you.
And reached my beloved family, or perished in your arms.

Your beaches are sadness, captivity, pain, and injustice.
Your bitterness eats away at my patience.

Al-Rubaish was a senior leader of Al Qaida in the Arabian Peninsula.  Captured in Pakistan, he was released from Guantánamo in 2006 and sent into custody to Saudi Arabia.  He escaped from the Saudis and went to Yemen where he resumed a leadership position in Al Qaida. He was killed in a drone strike in April 2015.

These are not details that a visitor to “Ode to the Sea” will see anywhere in the vicinity.

The paintings and the models in the show are unremarkable as art. They display no special skill or aesthetic sensibility.  That has not stopped Erin Thompson and her two fellow curators from attempting to squeeze whatever portentous meaning they can from the paintings.  For example, in reference to a painting of a glass vase, a bottle, and two cups, by Ahmed Rabbani (a member of Al Qaida who trained as a terrorist in Afghanistan), the curators observe in the exhibition notes, that the “empty vessels also serve as an oblique reference both to Rabbani’s absent family and to his acts of self-denial and resistance.”

Indeed, the principal work of the curators is detecting allegories of pain and suffering in banal landscapes. Abdualmalik Abud’s painting of a city skyline across a river on which sailboats skim elicits the curators’ comment, “The work features an inviting skyline of buildings the color of sea and sky, but they are unreachable from the determined-seeming road in the foreground.”

All of the paintings but one are representational.  The exception is “Vertigo at Guantánamo,” by Ammar Al-Baluchi, who was a key lieutenant of Khalid Sheikh Muhammad in organizing the 9-11 attacks. 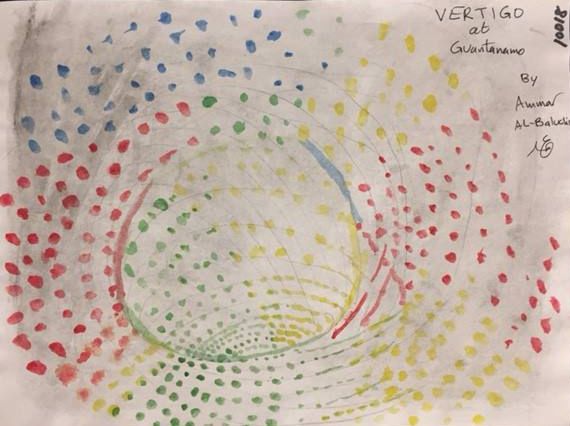 “Vertigo” consists of concentric rings of red, blue, and green dots, which the curators explain as his “effort to explain to his lawyers the vertigo he suffers after he sustained a traumatic brain injury during interrogation.”  When I was at this exhibit, Ms. Thompson was setting up “Vertigo” to use for the opening of her CBS interview.

Sometimes the curators have to work for these interpretations, but sometimes the prisoners offer a straight-up allegory.  The exhibit offers two images of the Titanic sailing along, no iceberg in sight, and Muhammad Ansi (an Al Qaeda operative who served on Osama bin Laden’s security detail) offers a painting of a child face down on a beach, his head in the surf.  The curators explain it is an image of Alan Kurdi, a refugee who drowned fleeing the war in Syria.

The American authorities at Guantánamo prohibited the prisoners from depicting violent scenes. The paintings are works that the prisoners’ lawyers obtained, but the Pentagon is now saying that such paintings belong to the U.S. Government.  Apparently, the U.S. military was caught by surprise at the efforts of the lawyers to turn seascapes and palm trees into propaganda.

The Guantánamo detainees, like prisoners everywhere, feel lonely and aggrieved.  The major theme of their artwork, not mentioned by the curators, is self-pity.  The curators do note that the paintings are “largely desolate,” Houses appear “uninhabited.”  Boats are “unmoored.” One boat is “coffin-like.” The sea “devours” a ship. The Statue of Liberty stands in the dark “presiding over a desert island” with no trace of New York City.  A lighthouse has had its warning beacon “extinguished.”

Why Would John Jay Do This?

What you won’t find in these paintings is any trace of repentance. These artworks are by terrorists and their accomplices who seem untouched by the monstrousness of their actions. They can wax sentimental about their own families and can draft images of hearts and flowers, but pity for the victims of their jihad is beyond their imagination—at least their visual imagination.

Perhaps that’s to be expected. They are, after all, warriors, and many of them pledged to fight on until they die, no matter what their lawyers say.  The greater puzzle is why John Jay College of Criminal Justice would provide a platform for these people to appeal to public sympathy for their plight.

Erin Thompson’s explanations, most recently in The New York Times, are the jejune rationalizations of someone whose fellow feeling for a prisoner has obliterated any larger horizons.  She writes:

Making art is a profoundly human urge. Viewing this art has allowed thousands of visitors at John Jay College and elsewhere a chance to see that its makers are human beings. These detainees have been treated in fundamentally dehumanizing ways, from torture to denial of fair trials, and their art reminds us that we cannot ignore their condition.

Most of us have never doubted that the detainees at Guantánamo are human beings. They just happen to be evil and dangerous human beings.  Their artwork testifies that they have the time to reflect on their situation, and having reflected, they see no need to alter their basic view of themselves or the world.  They are the victims. America is the enemy. Time is on their side.

I expect among those “thousands” of visitors at John Jay College who have made their way up past the 9-11 Memorial Hall to the sixth floor “Ode to the Sea” are some like the mother of the North Tower victim who feel a certain repugnance at this effort to treat the perpetrators of terror as hapless victims of American tyranny.  We aren’t the ones beheading journalists, burning people in cages, enslaving women, and bombing mosques. Learning that jihadists can paint empty seas, wrecks, and imminent disaster doesn’t make me feel any keener sympathy for their kind.

The question of why John Jay College would give such celebratory prominence to this exhibit, however, still troubles me.  The superficial answer is that John Jay College of Criminal Justice takes “justice” very seriously and is responding to the claims that the detainees at Guantánamo have been and still are being treated unjustly.

What’s superficial about that explanation is that many of the interned jihadists, once released, have gone straight back to jihad. According to the Director of National Intelligence, 111 of 532 prisoners released under President Bush were confirmed returning to the battlefield, and 74 others were suspected.  That’s more than a third.  The “injustice” of interning enemy combatants isn’t so clear.

Beyond progressive rhetoric about injustice lies the inexhaustible urge of the arts community to “transgress” and to discover something more “cutting edge” than last week’s effort to outrage bourgeois tastes.  “Ode to the Sea” is a typical academic venture in that hamster cage of ideology. What better way to rile people than to celebrate terrorist art at a college that educates students for careers in law enforcement?

The paintings of Muhammed Ansi and Abdualmalik Abud aren’t the only images of desolation on display at John Jay.  There is desolation of a different kind in the exhibit itself, which provides an apt image of American higher education’s growing disdain for the community it serves. John Jay, of course, is the college that recently fired an adjunct professor who participates in Antifa and who carelessly boasted that he likes teaching “future dead cops.”  Those words apparently went a little too far for the college president.  But expressing similar sentiments in watercolor merits elevation to the President’s Gallery.

Peter Wood is president of the National Association of Scholars and author of “1620: A Critical Response to the 1619 Project.”

3 thoughts on “Why Is a College of Criminal Justice Celebrating Art By Guantanamo Jihadists?”