A Confusing Racial Decision for Harvard

Harvard’s decision last month to rescind admission to Kyle Kashuv because of nasty racial tweets he sent three years ago is a curiously unprincipled action. Kashuv is obviously contrite. He shows all the indications of a reformed sinner eager to undergo Harvard’s diversity training. One would think that an institution so solemnly dedicated to social justice as Harvard—“we strongly believe that one of our greatest strengths is our incredibly diverse campus community”–would welcome a rogue ready to enter the haven of tolerance. And they would in this case, too—but there are other considerations.

The powers that be fear what admission to Mr. Kashuv would mean. It’s not that they have concerns about what he wrote on his social media in the past. It’s that they worry about what his presence on campus will mean in the future. Harvard is the richest U.S. school, with an endowment of $40 billion. It is the oldest college in America, established in 1636. Eight US presidents have attended Harvard. But the people who work there, from the president down to the graduate student teaching assistant tread very softly when it comes to issues of racism, especially relative to African Americans.

In the Age of Trump, race issues have become a national point of controversy over and over, but Harvard has a local situation to deal with as well. Back in 2007, the Black Men’s Forum, a student group at Harvard, organized a march to protest incidents of racial profiling on the campus. “My skin belongs at Harvard!” they chanted, “Harvard is here for us, too!” As one participant put it several years later, “We had bombarded the comments sections of college publications and run campaigns to handle racist professors, demand black student spaces on campus, and prove the lack of support for black students.” No doubt, some Harvard administrators remember that episode.

They read this piece last year in Thinkprogress.org, too, written by a female undergraduate: “What is it like to be black at Harvard? Let me tell you.” And they know, too, of the “I, Too, Am Harvard” project, conceived by a 2016 Harvard grad, which, among other things, tallies the nonstop microaggressions black students suffer on campus and in Cambridge. 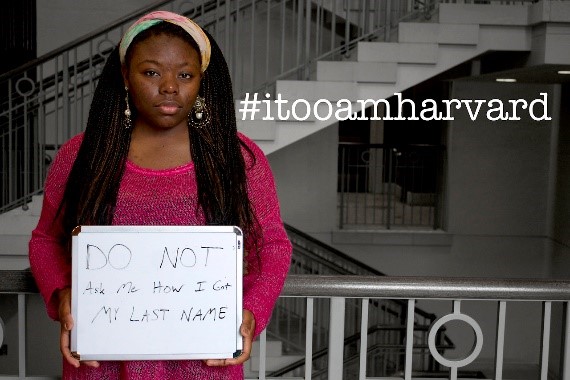 That was the background of the Kashuv situation. Administrators at Harvard had a difficult choice to make once Kashuv’s tweets surfaced. However much they might excuse the silly things, a high school sophomore guy does, and while some probably wanted to forgive him his stupidity, they had to consider the effect on other students if a kid showed up in their classes who was famous for tweeting the n-word.

The administrators at Harvard bear the burden of anticipating racial controversies well before they can happen. Indeed, they have put themselves in this position. Keep in mind that black students at Harvard have been aggressively recruited from high school. They had offers from Princeton, Columbia, Yale  Harvard drew them not only because of its prestige, but because, as the college brochures and the president’s speeches told them, Harvard is a wondrous domain of diversity and inclusion. The admissions people promised them repeatedly that they would thrive at Harvard in an environment of happy affirmation.

How could Harvard keep Kashuv after it has proclaimed it maintains zero tolerance for racism? Think about the possibility that some students of color who will land at Harvard next year faced some racial harassment during high school, perhaps over social media. If Harvard were to keep Mr. Kushuv, those minority high schoolers would realize that the insults they endured in 10th Grade, over Facebook or Instagram, are not a disqualification for the insulters. The nastiness hurt, and the memory of them linger. Does Harvard really want to reward the people who victimized them? That’s what the administrators think to themselves. It will make them angry, especially the black students who’ve been admitted to Harvard. They might very well crowd into the admissions dean’s office and demand that someone is fired.

This is the calculation Harvard administrators had to make. Principles and ethics here are less important than the impact on incoming undergraduates. No official wants a repeat of the Black Lives Matter protests of 2014, which did indeed lead to some removals of personnel. Harvard didn’t rescind Kushuv’s acceptance because he wrote obnoxious things in high school. Harvard did it because it knows that it has made grand pledges to prized students, who as a result, judge the social climate of the campus vigilantly. Harvard administrators consider the sacrifice of one admittee who has embarrassed himself a small price to pay for a calmer Fall 2019 semester.

One thought on “A Confusing Racial Decision for Harvard”