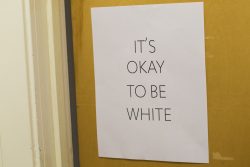 At Some Colleges, It’s OK to Be White Again

Inside Higher Ed reports that “It’s OK to Be White” posters have appeared on more campuses: The posters, which also appeared a year ago at this time, are put up without permission [from college officials]. Posters have been seen this year at Christopher Newport University, East Tennessee State University, Oklahoma City University’s law school, Susquehanna University, and Western Connecticut State University. […]

"Designing Assignments in the ChatGPT Era" – Inside Higher Ed, 1/31/23

"The university fighting back against the diversocrats" – Spectator World, 1/30/23