Progressive policies cause the racial achievement gaps that progressives spend so much time lamenting. That’s the conclusion of Minnesota lawyer and think-tank president John Hinderaker, based on recent educational research. He cites a report from Brightbeam, “The Secret Shame: How America’s Most Progressive Cities Betray Their Commitment to Educational Opportunity For All.” The report is authored by Chris Stewart, a liberal activist from Minnesota. He studied why the progressive public schools in Minneapolis’s biggest cities have among the country’s worst achievement gaps between white and black students. Brightbeam describes itself as “a network of education activists demanding a better education and a brighter future for every child.”

Stewart compared achievement by race in various cities classified as progressive or conservative. Conservative cities (as ranked by political scientists) consistently did a more effective job of shrinking student achievement gaps–occasionally, to zero–than progressive cities. The figure below summarizes the findings: 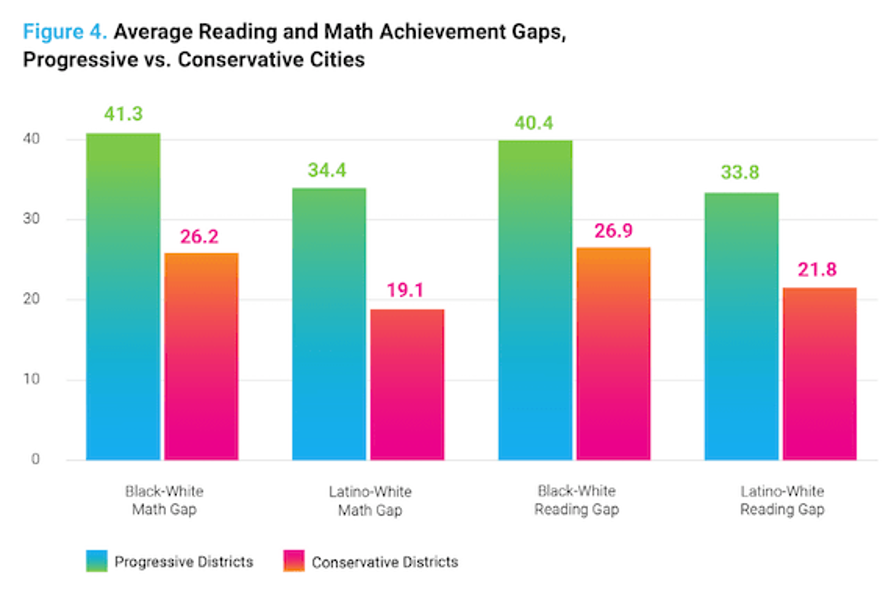 Brightbeam looked at a number of variables that it thought might help to explain these findings. It concluded that “of all the factors we looked at, progressivism is the greatest predictor.”

The Brightbeam study did not attempt to explain which particular progressive policies caused these disparities. But it did call on progressive school districts to rethink their assumptions. At Bacon’s Rebellion, the longtime journalist James A. Bacon suggests some likely causes:

* Agency. By blaming racism and discrimination for the woes afflicting minority communities, progressives deprive minority students of agency — the sense that they control their own destinies and that their efforts will make a difference. If minority students see themselves as victims of systemic racism, why bother working hard and “acting white”?

* Lower standards. As an offshoot of the “self esteem” movement, progressive educators don’t want to damage the self-esteem of minority students. Accordingly, they have lower expectations and set lower standards for minorities to offset the advantages that white students have from “white privilege.”

Research supports Bacon’s theory that breakdowns in classroom discipline resulting from progressive policies worsen the racial achievement gap. In New York City, suspensions were curbed by progressive school officials. The result? Minority students suffered most, as classroom disruption increased at the expense of their ability to learn. Manhattan Institute researcher Max Eden found that “schools where more than 90% of students were minorities experienced the worst” effects on school climate and safety due to restrictions on suspensions. It is predominantly-minority schools that are most often plagued by chronically disruptive students who make it difficult for their classmates to learn.

Other studies have also found that progressive officials’ refusal to suspend chronically disruptive students increases the racial achievement gap. As Eden noted in the New York Post, a “study by a University of Georgia professor found that efforts to decrease the racial-suspension gap actually increase the racial achievement gap.” That research found that “in public schools with discipline problems, it hurts those innocent African American children academically to keep disruptive students in the classroom,” and “cutting out-of-school suspensions in those schools widens the black-white academic achievement gap.”

In some places, progressives have curbed suspensions for violent or chronically defiant or disruptive students based on the assumption that suspensions must be racist, because it is disproportionately black students who are suspended. But racial differences in suspension rates don’t prove racism as appeals courts in Philadelphia, Chicago, and Richmond have noted. Instead, the differences in suspension rates reflect the fact that black kids are more likely to come from struggling single-parent households that fail to instill discipline. As the liberal Brookings Institution conceded in 2017, “Black students are also more likely to come from family backgrounds associated with school behavior problems.”

Education reporters, who are a staunchly progressive lot, have mostly ignored the Brightbeam study. But a few newspapers have recognized its findings. One example is an op-ed in the Minneapolis Star Tribune by liberal activist Nekima Levy Armstrong, titled “Research shows progressive places, like Minneapolis, have the worst achievement gaps.” Armstrong describes the findings of the Brightbeam study:

The Brightbeam report shows that progressive cities like Minneapolis do worse — and, surprisingly, conservative cities do better — when it comes to educating students of color. According to the report, conservative cities have gaps in math and reading that are on average 15 and 13 percentage points smaller than those in progressive cities.
***
Researchers also controlled for other factors that could potentially explain different educational outcomes, including poverty rates, population size, per-pupil spending and private school attendance rates. Surprisingly, none of these other variables made a difference in predicting the size of the opportunity gap.

What mattered most was whether the city was conservative or progressive. In three of the most conservative cities — Anaheim, Fort Worth and Virginia Beach, researchers found that leaders have either closed or eliminated opportunity gaps in either reading, math or high school graduation rates. Meanwhile, in our own “progressive” city of Minneapolis, the report showed that the shameful gap in math achievement between black and white students in K-12 is 53 percentage points, while the gap in math between brown and white students is 45 points.

Hans Bader is a senior attorney at the Competitive Enterprise Institute.

4 thoughts on “The Real Reason for Racial Achievement Gaps”

"China’s strict zero-COVID policy, still in effect nearly three years into the pandemic, has become a lightning rod for criticism of the government. University campuses have been at the vanguard of these public displays of dissent, which gained momentum after an apartment fire Thursday in the northwestern city of Urumqi killed 10 people who many say could have been saved if not for strict lockdown measures." – Inside Higher Ed, 11/30/22

How Our Higher-Education System Could Put Students First

"In short, colleges and universities do not put their students first. That is the point of a recent book by Paul LeBlanc, president of the University of Southern New Hampshire. In Students First: Equity, Access, and Opportunity in Higher Education, LeBlanc explains why our higher-education system so badly underperforms and why we need an educational 'ecosystem' in its place." – James G. Martin Center for Academic Renewal, 11/30/22

"A host of higher education associations, institutional leaders and advocates are calling on Congress to pass legislation this year to provide protections for recipients of the Deferred Action for Childhood Arrivals program. ... Members of the Presidents’ Alliance on Higher Education and Immigration are flying to Washington, D.C., this week to meet with lawmakers and make their case." – Inside Higher Ed, 11/30/22

"Postdoctoral scholars and academic researchers across the University of California system reached tentative contract deals Tuesday, 15 days into an ongoing strike that has severely challenged campus operations, including instruction. News of the deals came several days after more than 230 professors in the system pledged publicly not to teach or submit grades during the strike." – Inside Higher Ed, 11/30/22

"James Murphy, senior policy analyst at think tank Education Reform Now, in a new report calls for the U.S. Department of Education to take on this task. He argues the Education Department should ask more granular questions about applicants and admitted students, like their race and ethnicity, in an annual survey administered to colleges." – Higher Ed Dive, 11/29/22

Stanford Is Investigating Its Own President Over Research-Misconduct Allegations

"Stanford University’s board of trustees is overseeing an investigation into the university’s president, Marc Tessier-Lavigne, over allegations that neurobiology papers that he co-authored contain multiple manipulated images, a university spokeswoman told The Chronicle on Tuesday night." – Chronicle of Higher Education, 11/29/22

"The six-year completion rate for undergraduates who started college in 2016 reached 62.3%, the highest level this decade but only 0.1 percentage point above the previous year’s cohort, according to a new report from the National Student Clearinghouse Research Center." – Higher Ed Dive, 11/29/22

The Zombie Survival of Affirmative Action

"The U.S. Supreme Court is expected to rule against affirmative action programs this term, finding they violate the Constitution because they deliberately discriminate by race. If you think that ruling will stop universities from treating racial groups differently, think again. Admissions officers are already hard at work figuring out ways to evade the forthcoming decision." – RealClearPolitics, 11/29/22

"Ohio State University President Kristina Johnson will step down after commencement in May, ending her tenure after less than three years at the 67,772-student Big Ten institution. The Columbus Dispatch reported Monday that the university’s board of trustees asked Johnson to step down after an outside firm reviewed concerns raised by staff." – Higher Ed Dive, 11/29/22

The Decline of Higher Education

"If we fast forward to the present, one feature of what’s happening on the campuses looks similar: that crucial analytical function is still getting stifled whenever it offends an equally shallow local moralism. But there’s a startling difference: the actors have changed places. It’s now the professors who do what the small-minded small-town worthies used to do ... " – City Journal, 11/29/22