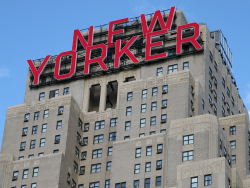 [Le]Manning the Barricades for Affirmative Action

Nicholas Lemann, former dean of the Columbia School of Journalism, currently a professor there, and author of The Big Test: The Secret History of American Meritocracy (2000), has a long new article in the New Yorker, “Can Affirmative Action Survive?,” warning ominously—or hopefully, depending on your point of view—that “The Court may signal that it […]

“In May, the UNC School of Medicine revised its Guidelines for Appointment, Reappointment, and Promotion. Now, faculty seeking promotion must tout their commitment to diversity, equity, and inclusion. One sample DEI statement, posted on the School of Medicine website, shows what that requirement might entail, concluding with a nod to the concept of intersectionality. ... These revisions mark an innovation in DEI policy—a step beyond the now-common DEI statements for admissions and hiring. But they make up only one small part of a much larger overhaul taking place at the UNC School of Medicine.” - The James G. Martin Center for Academic Renewal, 11/22/21

“By requiring Kilborn to participate in this individualized diversity training, UIC has not only violated his right to academic freedom, but has also breached a promise it made to Kilborn and his FIRE-provided attorney. This is, to put it plainly, a new low for UIC. The university must immediately remove this unjustified requirement. Should it fail to do so, FIRE is committed to using all the resources at its disposal to defend professor Kilborn’s rights.” - Foundation for Individual Rights in Education, 11/22/21

D.C. is changing its mask rules, but the city's colleges are staying the course

“While the District is set to ease its indoor masking requirement on Monday — impacting office buildings, retail stores, gyms and more — colleges and universities across the city say their own mask policies are staying in place. Since returning to full-scale in-person learning in August, D.C.'s major universities have required students and employees to wear masks in most indoor settings, and all but Catholic University have required coronavirus vaccinations. Now, as the holidays approach, university officials and public health experts say mask-wearing will remain essential in protecting against virus surges.” - Washington Post, 11/21/21

“More than 30,000 borrowers are receiving an estimated $2 billion in debt relief in this initial round, according to the Education Department. Of that group, at least 10,000 have already had their balanced canceled, while the remainder will have a clean slate in the coming weeks. In October, the department said it would temporarily allow all payments that eligible borrowers made on federal student loans to count toward the forgiveness program. The decision allows participants to sidestep the program’s rigid rules to receive debt relief, but only until Oct. 31, 2022.” - Washington Post, 11/20/21

“President Biden’s sprawling economic plan has endured a series of cuts that left some within higher education wondering whether any of the sector’s priorities would make it into the final legislation. While the $2 trillion compromise bill that passed in the House Friday is absent key proposals such as tuition-free community college, it includes a series of provisions that experts say are a down payment on the president’s education agenda. Whether all of those provisions will survive the Senate is yet to be seen.” - Washington Post, 11/19/21

“Every Berea student brings to campus similar stories of resilience, grit and a dogged determination to use an amazing educational opportunity to change themselves and the world. Our underserved students — and all Pell recipients — need champions; they don’t need someone fictionalizing their nature and circumstances. Let’s agree this is worth doing and then focus on what really works in providing every young American with an educational opportunity commensurate with their talent and potential, not using them as pawns in a war against enlightened and student-centered higher education.” - The Hill, 11/19/21

“A federal judge dismissed a lawsuit Thursday brought by Grand Canyon University, a Christian college in Arizona with a massive online education presence, that alleged the school didn't receive all the coronavirus relief funds to which it was entitled. At issue was whether Grand Canyon University should be considered a nonprofit or a for-profit school. For-profit schools received a lower share of federal coronavirus relief funds and had more restrictions on how they could use the money.” - Higher Ed Dive, 11/19/21

“The percentage of graduates earning bachelor's degrees in the class of 2020 who took out private student loans ranged from 3% in Utah to 27% in North Dakota, according to a report released this week by The Institute for College Access & Success, a research and advocacy group. Students attending private nonprofit colleges were more likely to graduate with private debt than those attending public institutions. The share of graduates with private debt surpassed 15% at 39% of private nonprofits. The same was true at just 22% of public institutions.” - Higher Ed Dive, 11/19/21

“Growing pressures from inflation are likely to translate into higher operating costs for colleges, most of which will not be able to compensate by raising tuition, according to a report from Fitch Ratings. Colleges will likely see higher costs for supplies and labor in 2022, Fitch projected. Most will be able to absorb increases because they saw relatively limited expense growth in 2020 and 2021. But their cushions will fade beyond the current fiscal year as they use up COVID-19 relief funds from the federal government.” - Higher Ed Dive, 11/19/21

The Real USC Scandal is How Democrat Politicians, Not Celebs, Got In

“The arrest of Los Angeles Councilman Mark Ridley-Thomas over a bribery scheme was nothing special. Recent arrests and indictments have decimated the ranks of the Cincinnati and Detroit city councils. The corruption of urban Democrat machines is a dog bites man story and the responsibility of those machines for much of the misery they blame on the myth of 'systemic racism' may well be the single most underreported story in the establishment media. What makes the Ridley-Thomas arrest stand out is that the bribe was academic.” - FrontPageMag, 11/19/21