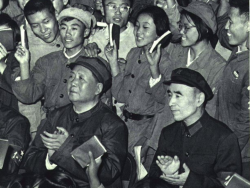 On a warm day in the early fall of 1966, a 17-year-old former high school student led a group of local Red Guards in a struggle session to publicly shame members of the “Five Black Categories (landlords, rich farmers, counter-revolutionaries, bad elements, and right-wingers)” in a small town near Shanghai. The teenager, who came from […]

"The University of Michigan announced Wednesday that it had reached a $490 million settlement agreement with attorneys representing more than 1,000 survivors of alleged sexual abuse by former, now-deceased university doctor Robert Anderson. The agreement, if approved, would resolve all the survivors’ claims against the university. A total of $460 million would be available to the approximately 1,050 current claimants, and another $30 million would be reserved for potential future claimants who join the settlement before July 31, 2023." - Inside Higher Ed, 1/20/22

College Athletes Are Cashing In on the NCAA’s New Rules

"UVA and the New 'McCarthyism' –An Insider’s Perspective, a new report by Joel Gardner discusses increasing politicization, censorship, and institutional bias at the University of Virginia. Despite recently adopting its own set of free expression principles, the University has exhibited a free speech double standard and imposed mandatory affirmation of “Diversity, Equity, and Inclusion” among its employees and faculty." - The James G. Martin Center for Academic Renewal, 1/20/22

"The University of Virginia and George Mason University will no longer require employees to get vaccinated against the coronavirus, following a directive from Gov. Glenn Youngkin, officials announced Wednesday. At least five other Virginia campuses have rescinded similar mandates: Virginia Tech, James Madison University, Virginia Commonwealth University, the College of William & Mary and the University of Mary Washington." - Washington Post, 1/19/22

"A federal judge has decided against holding a trial in a parent-brought lawsuit against Fairfax County Public Schools over changes to the admissions system at prestigious magnet school Thomas Jefferson High School for Science and Technology, known as TJ. Instead, the judge will issue a ruling. The case, filed in March by parent advocacy group Coalition for TJ, was supposed to go to trial Jan. 24. But U.S. District Judge Claude Hilton said at a Tuesday hearing that he sees no reason to hold a trial in the case because there are no material facts in dispute." - Washington Post, 1/19/22

"During the last year, we have seen youth movements around the globe demanding wide-ranging structural reforms. Shouldn't early career scholars follow this example and take an active role in transforming academia? My invitation for university presidents, provosts and senior leaders in the higher education sector is to launch similar programs at their institutions and professional organizations to provide increased support for early career scholars. You would be contributing to a much-needed diversification of voices at the table, now and in the future." - Higher Ed Dive, 1/19/22

"Tennessee’s new venture enjoys bipartisan support. It’s been launched by a Republican governor and legislature and has also been endorsed by the Biden administration’s Secretary of Education, Miguel Cardona, who calls it 'a model for states across the country that are working to address shortages in the educator workforce and expand the pipeline into the teaching profession.' As with any such initiative, the tricky part is always the translation of a good idea from paper to practice. So, we’ll see how that goes. But Tennessee has launched a program full of promise that could potentially point the way to more effectively staffing America’s classrooms." - American Enterprise Institute, 1/19/22

"Transfer enrollment appears to have steadied in fall 2021, declining by less than 1% year over year after dropping sharply the previous fall, according to new data from the National Student Clearinghouse Research Center. This fall's decline represents a loss of 11,300 students. That compares to last fall's 9.2% year-over-year decrease, which amounted to 137,000 students. The report found several positive trends among transfer enrollment in fall 2021, which is up 2.3% among continuing students. On the other hand, transfer students returning to higher ed after stopping out of college trended downward, decreasing a further 5.8% in fall 2021." - Higher Ed Dive, 1/19/22

"A couple of weeks after a mob of Donald J. Trump’s supporters stormed the nation’s Capitol, Cathy Cox, then dean of Mercer University’s law school, convened a group of students on a Zoom call for what she described as a real-world lesson in contract law. At issue was a mock courtroom at the Georgia university named for L. Lin Wood Jr., an alumnus, donor, and ardent Trump supporter. On social media Wood had increasingly trafficked in political conspiracy theories, and he had been accused of inciting violence. Not long before the Zoom call, Wood had taken to Parler, the conservative platform, with what sounded like a call to execute the vice president, Mike Pence." - Chronicle of Higher Education, 1/19/22

"Colleges with selective admissions should evaluate whether these practices are compatible with their goals of advancing historically underrepresented students in higher education, a new report urges. The report also features recommendations for simplifying application and financial aid processes to benefit these students. It was released Wednesday by the National Association of Student Financial Aid Administrators and the National Association for College Admission Counseling." - Higher Ed Dive, 1/19/22