Home » Articles » A Game of Leftist Whac-A-Mole: Why College Presidents Are Quitting

A Game of Leftist Whac-A-Mole: Why College Presidents Are Quitting

The last few months have seen a rash of resignations by college presidents, most of which have been voluntary. These are no lightweights—the growing list of outgoing presidents includes those at some of the nation’s leading institutions, including Dartmouth, UPenn, Northwestern, MIT, Fordham, and most recently, my own alma mater, Columbia. Early resignation seems to have become the norm, not the exception.

What gives? Why are so many willingly leaving what should be the most coveted position in the game? Why walk away from the seven-figure salary, the prestige, and the fame? Many have speculated about the recent uptick, but ultimately, the reason is quite simple: today, the college presidency is plainly unbearable and amounts to a vicious and unwinnable game of leftist Whac-A-Mole.

College Presidency Then and Now

College presidency ain’t what it used to be. The role has changed tremendously since it first appeared, to the point where today’s college presidents operate more like corporate CEOs than anything else. In a 2017 article, Deloitte Managing Director Cole Clark traces five broad eras of the job, noting that it initially wasn’t even conceived of as a stand-alone profession. 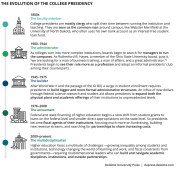 “Multidisciplinarian” is a nice way to describe the modern college president. Others have used the phrase “multidimensional leader.” But both of these are manifestly euphemistic—they are an excuse to load college presidents with tasks and concerns that shouldn’t be their job in the first place, or the job of a university at all. It should be no surprise, then, when presidents drop like flies.

College presidents are charged with an amazing range of responsibilities. There’s nothing wrong with this in and of itself. Indeed, the president of any organization or company ought to be busy with wide-ranging duties, higher education being no exception. But what exactly should a college president be busy doing? In short, he should devote himself to protecting and promoting the core mission of the university. And what is that mission? This will make clear what a college president’s job should be, and what it should not be.

In his 2016 report The Architecture of Intellectual Freedom, National Association of Scholars President Peter Wood points to four primary purposes of higher education.

The last of these four may seem the least definite, but it is surely the foundation of the other three. We seek a form of education that teaches young men and women how to be free.

Vocation, culture, truth, and character. That’s a lot for a college president to keep track of, especially when he must not only be concerned with academic matters, but also with ensuring that the institution holds together administratively and remains afloat financially.

But today’s college presidents are asked to promote a quite different set of values, in many cases the exact opposite of those listed above. After all, if this holy quaternity is actually the unholy vestige of white supremacy, as many claim, then we ought to invert it entirely. Barbarous activism supplants vocation; culture (at least Western culture) is to be “deconstructed,” not promoted; objective truth-seeking is discarded in favor of postmodern subjectivism; and demographic identity replaces character. This great inversion has had disastrous consequences for academia and has fundamentally transformed higher education as we know it, and thereby the college presidency itself. College presidents have sowed the seeds of this transformation for decades—out of ignorance, cowardice, or malice—and are now reaping the bitter, perhaps unforeseen, consequences. The college presidency has lost its way and, in the process, has lost its luster.

One such consequence is that college presidents are now expected to embrace the new and all-consuming role of “Activist-in-Chief.” After every domestic or international tragedy (limited to leftist-approved tragedies, of course), faculty, staff, students, and alumni wait with bated breath for the Office of the President to issue a statement condemning the bad guys and praising the good guys. This is, of course, indicative of a broader trend that includes leaders of virtually every field (as I prepare an article image for this piece, I note that Adobe’s loading icon is blue and yellow in support of Ukraine).

Speaking of Ukraine, shortly after the story broke, many American college presidents began to issue statements condemning Russia and praising Ukraine. President Lee Bollinger of my alma mater published multiple statements to this effect. Now, I happen to believe that Russia’s actions are unjustified and reprehensible, but that is beside the point. It is simply not a college president’s job to comment on current events, especially those occurring halfway around the world. This is not part of a university’s mission, and such missives will necessarily be limited to the issue du jour. For instance, has President Bollinger ever issued a public statement on the ongoing slaughter of Nigerian Christians by their Muslim neighbors? Of course not, and he never will.

This is likewise inappropriate regarding domestic controversies. Take, for example, the 2020 killing heard ‘round the world: that of George Floyd. Within days of this incident, college presidents scrambled to issue statements condemning the “systemic racism” inherent in the police force and in America as a whole—well before the facts of the case were made known. Turning again to President Bollinger, we see one statement issued shortly after the killing occurred, another for the one-year anniversary of the event, and yet another after the jurors in the Derek Chauvin trial announced their decision. Bollinger is far from alone—the National Association of Scholars counted over 300 similar statements issued by college presidents around the country. I’m sure many of these presidents felt genuine dismay at the killing of George Floyd, as did I. But again, that is irrelevant. College presidents ought not comment on current affairs that do not directly affect their school, and they ought not make such rash statements before anyone knows the facts on the ground.

These statements are not merely instances of irresponsible leadership. They also create a de facto institutional stance on these issues which may not be violated without serious consequences. The Floyd incident itself generated a series of academic cancellations, all of which were patently absurd. José Sartarelli of UNC Wilmington, Ronald Caltabiano of DePaul, W.P. Chedester of WVU, Daniel Patrick Moloney of MIT, and Gordon Klein of UCLA were all canceled for saying or doing the “wrong” thing in response to George Floyd’s death—including questioning Floyd’s character, displaying a Thin Blue Line flag on a Zoom call, and declining to postpone a final exam for black students.

It’s abundantly clear that these ideologically charged statements by college presidents are both inappropriate for the role and detrimental to academic freedom. What these presidents may not have realized, though, is that their own statements will at some point bite them back, and that their attempts to pacify the pervasive anger on campus will not be enough to save them in the end. The recent uptick in resignations shows that they are beginning to wake up to this reality.

A Game of Leftist Whac-A-Mole

Eventually, college presidents get trapped in a vicious game of leftist Whac-A-Mole. It’s simply impossible to pay equal attention to all of the Left’s favored causes—climate change and fossil fuel divestment, racial “justice,” graduate student compensation, sexual harrassment, “gender-inclusive” facilities, COVID-19 mandates, etc.—so when college presidents focus on whacking one mole, a few more pop up in its place. No matter how hard they try, they can never keep up. I imagine that all of this mole-whacking is exhausting, even if a president’s statements are primarily ghostwritten.

More than that, I doubt that most college presidents sought out their role in order to become Activist-in-Chief. It’s a thankless job—at best, you save your own skin for a few weeks; at worst, you feel the wrath of a thousand leftists because you didn’t issue the statement fast enough, you didn’t issue enough statements, or you phrased the statement insensitively. Perhaps some incoming presidents look forward to wearing this hat, but that bright-eyed naivety is sure to wear off before long. Only after getting battered a few times do they realize that by making such pronouncements, they have made themselves the plaything of the activists. They are no longer in charge, and they must constantly look over their shoulders to see if their new masters approve of their behavior.

All of this to say, the modern college presidency is unbearable. Our institutions, including the presidents themselves, have made it unbearable. Any college president with at least a few brain cells remaining will see where this is going and hightail it out of there. Given the state of affairs, their decision makes perfect sense. But it will leave a dangerous power vacuum in American higher education. College presidents who actually seek to lead their institution rather than follow the whims of enraged activists will either resign or be forced out. Those who take their place—those who see the state of the college presidency and actually want the job—will be far worse than their predecessors. “Then it goes and brings with it seven other spirits more evil than itself, and they enter and dwell there, and the last state of that person is worse than the first” (Matthew 12:45, ESV). But even they won’t be radical enough, and the cycle will continue until our colleges and universities are a smoldering ash heap of bitter resentment.

America’s college presidents must grow a backbone and refuse to kowtow to campus activists. It’s not their job, and it never was. If they don’t stand up to the madness, they’ll get trapped in an endless game of Whac-A-Mole with only themselves to blame. It’s a self-destructive game that’s impossible to win, and the president is far outnumbered by the moles.

David Acevedo is Managing Editor of Minding the Campus and Communications & Research Associate at the National Association of Scholars.

11 thoughts on “A Game of Leftist Whac-A-Mole: Why College Presidents Are Quitting”