Home » Articles » College Prep: Put on a Suit and Tie

College Prep: Put on a Suit and Tie

There is no shortage of silly proposals on college campuses.  We have, for instance, the University of Tennessee Office for Diversity and Inclusion asking students to use gender-neutral pronouns such as ze in order to create a more welcoming campus. Transgender people, you see, don’t fit this gender binary, and so a foundation stone of the English language must be changed.

But every once in a while a policy surfaces that is so wise and appropriate that it deserves applause from even the sharpest higher-ed critics. Dillard University has one in place, and it should spread across the country.  It’s a suggested dress code for male students.  As insidehighered.com reported it two weeks ago,

when the academic year begins today at Dillard University, faculty are expecting to see far more professional attire, as male students are encouraged to don suits and ties for the first day of class.

Yes, 19-year-old males, who typically prefer t-shirts and caps and jeans and cargo-shorts and other middle-school-appropriate attire, are urged to dress up and look like professional men.  The initiative originated not in the administration, either.  It was the conception of a Dillard senior, one Jerome Bailey, who realized at the end of his undergraduate career in 2012 that he didn’t realize at the beginning the meaning and value of proper deportment, including the type of clothing you wear.

The goal of the program is “to elevate the standard for the appearance and image of Dillard men.”  That adds a peer-pressure factor to the idea, which probably ensures its success more than would faculty and administrative support.  For entering students who have no suit or tie, the school keeps a shared “closet” from which they can borrow the apparel they need. Professors and upper-classmen will assist them in learning how to tie a tie, too.

At present, about 40 percent of the undergraduate males show up on Day One looking like junior professionals. The dean of students tells the reporter, “On the first day now, there are suits everywhere on campus. And it’s a fantastic look.”

We might add another justification for sharp dress besides decency and manliness. When organizations query employers about the deficiencies they see in younger workers and candidates for jobs, the respondents often highlight poor “soft” skills. One poll by CareerBuilder asked them to name the skills recent college graduates lack the most. Topping the list was “Interpersonal or people skills,” which drew 52 percent. Math skills came in at only 15 percent, computing and technical prowess at 13 percent.

Managers are worried, and any evidence of adolescence they see during the screening of candidates will be a disqualification. Another survey by the National Association of Manufacturers found that among the “most serious skill deficiencies” in the workplace was “Inadequate basic employability skills (attendance, timeliness, work ethic, etc.).

The suit-and-tie program at Dillard addresses these deficiencies by setting a better tone.  Males coming into college live largely in a world of pseudo-masculine youth culture. It is anti-intellectual, anti-eloquent, sloppy, irresponsible, and irreverent. Dillard is a historically black college, so we should add the hip-hop culture of misogyny and aggression to the mix.  The values that go with it are contrary to the values of most workplaces. You can’t talk in young male lingo in a job interview, and you can’t dress that way.  Everything must change—posture, diction, and manners. Put a young male in a suit and tie, and we see that process begin to happen.

The Dillard case forms a worthy contrast to what happened at Henderson State University recently when the school posted signs stating that saggy pants are prohibited.  One news story blasted, “’Sagging pants’ sign causes uproar at Henderson State University.” The sign included profanity, excessive loudness, and rude behavior, but the sagging pants got all the attention. That’s because many critics pointed out that this targets African American students, who make up around one-quarter of the student body. Two students have called for the university to hire an “official diversity officer” so that such racial insults don’t happen again. 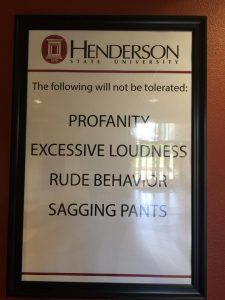 The ACLU (of course) objects to all such bans as “an affront to the Constitution.” Its press release from a few years ago stated that such rules license police to stop people on the street and search them merely for committing a “fashion crime.”

In opposing ordinary rules of decency, critics borrow the old argument that standards are just social constructs and can be revised, especially when they have a disparate impact, if not a racist motivation.  If colleges buy that argument, then the only standards of conduct left are those demanded by political correctness. The sad consequence is that when many of these liberated and affirmed youths enter the job market, they’re going to hit a wall, and not all the cries of injustice and racism are going to help them one bit.

"Colleges and universities in southwestern and central Florida are assessing damage and evaluating reopening plans in the wake of Hurricane Ian. Some colleges that prepared for severe conditions, including the University of Tampa and the University of South Florida, emerged from the storm with minimal damage and were able to reopen residence halls by Friday morning. Others were hit harder." – Inside Higher Ed, 10/3/22

Can the US learn from student loans Down Under?

"Biden wants to offer more generous terms under income-driven repayment, which could mean more people choose to use the alternative loan system. ... An expansion could place America’s loan system closer to that of other countries that depend primarily on income-contingent loans. Australia was the first country to pioneer such a loan framework in 1989." – Higher Ed Dive, 10/3/22

"Princeton University is cutting ties with 90 fossil fuel companies following a vote by the Board of Trustees. The university announced the move Thursday, noting that the decision to 'disassociate' is part of an effort to achieve an endowment portfolio with net-zero emissions." – Inside Higher Ed, 10/3/22

"I would cite five factors that have likely led to dramatically failing performance in introductory economics, specifically. Please note, I am not trying to 'blame' students for their failing performance; rather, I am trying to understand it. Remedying the situation will require action by both students and faculty." – James G. Martin Center for Academic Renewal, 10/3/22

"Advocacy groups and researchers are expecting high voter turnout among college students during the midterm elections this fall, but they will still have to overcome skepticism among younger voters who question the impact of their vote and who face a series of logistical hurdles imposed by several Republican-led states." – Inside Higher Ed, 10/3/22

Experts say schools could recover pandemic losses by 2028. What then?

"When will the U.S. education system return to the learning levels of 2019? One headline summed up the problem this way: 'Two Decades of Growth Wiped Out by Two Years of Pandemic.' People who have been studying our schools for decades are cautious when answering my question. Some say reading and math averages could rebound by 2028, but they admit many children will never get everything they missed." – Washington Post, 10/2/22

"At Montpelier, the home of James Madison, a massive political reeducation effort financed by leftist billionaire David Rubenstein has made it 'All About Slavery, All of the Time.' Madison’s role as the key architect of the Constitution and defender of its provisions in the Federalist Papers is given little attention." – American Greatness, 10/2/22

"Dr. Anna Gabrielian, an instructor of anesthesiology and critical care medicine at Hopkins, and her wife, Dr. Jamie Lee Henry, a major in the U.S. Army, are facing a count of conspiracy and seven counts of wrongful disclosure of individually identifying health information. They could face up to five years in prison for conspiracy and 10 for each count of wrongful disclosure." – Inside Higher Ed, 9/30/22

"When President Biden last month announced plans to forgive up to $20,000 in federal student loans for eligible Americans, the department didn’t definitively say whether privately held federal student loans would be included in the plan but said that it was discussing the issue with private lenders. Now, those borrowers have an answer: their loans will not be forgiven." – Inside Higher Ed, 9/30/22

The ACT is Still Useful

"As a diagnostic tool, the ACT is invaluable in identifying those who need help preparing for college, a vocation, or the mundane tasks of adulthood (like managing a household budget). Knowing that only 25 percent of students who took the ACT in 2021 met all four College Readiness Benchmarks, and that 55 percent (711,705 students) were 'below proficient' in understanding complex texts, are critical pieces of information if one seriously wants to help students succeed." – James G. Martin Center for Academic Renewal, 9/30/22

"But for that shrinking pool of political scientists for whom a vibrant and pluralistic professional association still matters, it may be time for a reckoning. So here is my challenge: make 'political and viewpoint diversity' the theme for a future APSA annual conference. Recognizing the problem is the first step on the road to recovery." – Bruce Gilley, 8/29/17