Ice cream cake has a disturbingly short lifespan in my home. When one is nearby, I ruthlessly hunt it down and devour it. Some days, when I have biked to work or gone for a run, I easily convince myself that I deserve cake as a reward. But exercise does not cause my cake-eating. It simply provides a rationalization for what I was going to do anyway.

Silly as it may seem, my cake-eating habit is similar to colleges’ habit of regularly raising tuition. When there are declines in state funding or increases in faculty compensation or college aid budgets, colleges often feel justified in raising tuition. But colleges raise tuition regardless of what happened to state funding, faculty compensation, or financial aid budgets. Colleges raise tuition because they cannot or will not resist the temptation to do so.

The best explanation for this tendency is provided Howard R. Bowen’s The Costs of Higher Education, which introduced the five laws of higher education costs:

Conventional wisdom explains rising tuition by pointing to the combined effect of 1) declines in state funding, 2) increases in faculty compensation (Baumol’s cost disease), and 3) increases in college-funded scholarships and discounts (institutional aid). In contrast, Bowen’s Laws imply that colleges will increase tuition regardless of what happens to these costs and revenues. My new paper, using data from the Department of Education, finds that tuition is likely to increase by a substantial amount even if there is no change in state funding, faculty compensation, and institutional aid per student.

Another piece of evidence that undermines conventional wisdom is the strong statistical evidence that changes in state funding, faculty compensation, and institutional aid do not have the presumed $1 for $1 relationship with tuition. At public four-year colleges, on average, tuition increases by $0.05 to $0.19 for every $1 decline in state funding per student, $0.07 to $0.40 for every $1 increase in faculty compensation per student, and $0.08 to $0.75 for every $1 increase in institutional aid per student. These estimates are generally far from the conventional wisdom’s presumed $1 impact for each.

Moreover, the statistical results indicate that the assumption of a $1 for $1 effect on tuition is not supported by the historical evidence. Using those more realistic estimates, on average, 75-91% of the change in tuition at public four-year colleges is left unexplained by changes in state funding, faculty compensation, and institutional aid.

While Bowen’s Laws provide an accurate description of what colleges do regarding tuition (raise it), it does not answer the question of why colleges want to raise tuition. The answer to that question is that they want to spend more money, and they want to spend more because they are rewarded for spending more: They can recruit prize-winning faculty and top students, build better facilities, move up in college rankings, etc. But in order to spend more, they need to bring in more money, and one of the ways they can do that is by raising tuition.

This strange phenomenon stems from the dysfunctional nature of competition in higher education. The fundamental problem is that the quality of a college education is not known, which leads to two perverse side effects. First, without any measure of quality, colleges compete in a zero-sum game for relative standing based on reputation – a never-ending academic arms race. Second, as Bowen points out, without any measure of quality “it is easy to drift into the comfortable belief that increased expenditures will automatically produce commensurately greater outcomes.”

Trapped in an Arms Race

Thus, because educational quality is unknown, colleges continually attempt to increase spending under the belief that doing so will both improve their reputation and lead to better outcomes. But the goalposts are moving: their peers are increasing spending too. This academic competition puts enormous pressure on any revenue source, hence the phenomenal growth of fund-raising offices, the commercialization of research, and of course, skyrocketing tuition.

The moral of the story is that tuition increases because colleges are trapped in an endless academic arms race to spend as much as possible, and raising tuition is one tool that allows them to spend more than they otherwise could.

For each time period in the figure below, there are three bars with the same cumulative height equaling the change in tuition for that time period for the typical student (all values in these charts are enrollment weighted averages). 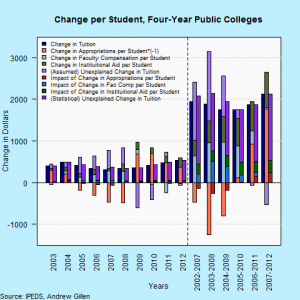 The first bar (dark blue) in each time period is the observed average increase in tuition during that time period (“Change in Tuition”). For example, in 2003, this value was $396.

The last component of the second bar (light purple – “(Assumed) Unexplained Change in Tuition”) indicates how much of the actual change in tuition is left unexplained, assuming the conventional wisdom is true. For example, in 2003, state funding per student fell by $302 per student, faculty compensation fell by $44 per student, and institutional aid increased by $35 per student. Assuming the conventional wisdom is true, this means that tuition should have increased by $293 (302-44+35 = 293). This leaves $103 of the $396 increase in tuition unexplained (396-293 = 103).

The third bar for each time period does not make any assumptions about the impact on tuition of changes in state funding, faculty compensation, or institutional aid. Rather it uses regression analysis to determine each factor’s correlation with tuition, which is then multiplied by that time period’s change in the variable to yield a more accurate estimate of the impact on tuition. For example, for 2003, the regression results indicates that a $1 decline in state funding per student is correlated with a $0.07 increase in tuition, so the impact of the change in state funding on tuition that year was $21 (the $302 decrease in state funding per student multiplied by the -0.07 correlation), shown in the red portion of the bar (“Impact of Change in Appropriations per Student”).

What the New York Times Got Wrong About Slavery in America

"The New York Times does a disservice to its readers with the 1619 Project by presenting a simplistic and misleading story of the complex role that the institution of slavery played in the history of the United States, and it largely ignores the role that the underlying values of the Anglo-Scottish Enlightenment that undergird the new nation played in ending slavery and the slave trade." - George Avery, 10/2/19

"Universities no longer even maintain the pretense of dispassionate rational and free inquiry, focusing instead on a particularly toxic and frankly absurd form of 'social-justice' activism, increasingly even in the hard sciences. Why does this situation persist? Here, I can contribute to our understanding, having had a front-row seat to perhaps the most spectacular failure of a higher-education reform effort in recent memory: the 'Liberty Institute' at the University of Texas at Austin." - The James G. Martin Center for Academic Renewal, 7/1/22

"George Washington University rejected calls to remove Supreme Court Justice Clarence Thomas from its law school faculty by students and others frustratedover the judge’s vote to overturn Roe v. Wade and his urging to reconsider other landmark civil rights cases. In a message to the campus this week, officials defended Thomas, who has lectured at the law school since 2011." - Washington Post, 7/1/22

"The board of the Virginia Community College System agreed Wednesday to add a representative of Governor Glenn Youngkin’s administration to the search committee for a new chancellor. The move came after Youngkin told board members to include his administration in the search process or resign, The Richmond Times-Dispatch reported. Youngkin has been pushing to be involved in the search for several months." - Inside Higher Ed, 7/1/22

Mills Becomes a Part of Northeastern

"Mills College officially becomes part of Northeastern University today. The merger was first announced last June, and it was opposed by some students and faculty at Mills. Current Mills students can graduate from Mills or transfer to Northeastern at no expense. Mills, historically a women’s college, will become 'gender inclusive.'" - Inside Higher Ed, 7/1/22

Repairing the Road for Returning Students

"To stabilize enrollment and ensure their long-term viability going forward, institutions of higher education must look beyond the declining pool of first-time, full-time learners and place their focus on the estimated 36 million students in the U.S. with some college credit but no degree. This is also a social and economic justice imperative at a time when an increasing number of new jobs require education or training beyond high school—yet individuals from racial and ethnic minority groups are disproportionately represented in low-wage career paths." - Inside Higher Ed, 7/1/22

Abortion Is a Higher-Ed Issue

"Let’s be clear: Abortion is a higher-ed issue. Most abortions in the U.S. are provided to women in their 20s, according to the latest data from the Centers for Disease Control and Prevention. Women aged 20 to 24 accounted for 28 percent of abortions, while those aged 25 to 29 accounted for 29 percent. ... Abortion makes it possible for students to pursue, and complete, higher education. Research has shown that the 'most common reason' young people drop out of college is unplanned pregnancy." - Chronicle of Higher Education, 6/30/22

"Montgomery County Public Schools’ new social studies framework will expose fourth- and fifth-graders to more American history — particularly Black history — at a younger age. The new curriculum will incorporate anti-bias and anti-racist content and local history about Montgomery County, according to Tracy Oliver-Gary, the district’s social studies supervisor. It was presented to the county school board this week and received unanimous approval." - Washington Post, 6/30/22

"Americans can learn from Asian-American success. Parents should expect more, not less, from their children. Of course, such expectations can go too far. But they need not be overdone to improve academic achievement. Canceling honors classes, moving unprepared students ahead, and implying that Indian-American students should 'play small' is certainly not the answer. Life is not a zero-sum game. The successes of some should inspire others to do better, not fuel bitterness and envy." - City Journal, 6/30/22

"Columbia University will not submit data to U.S. News & World Report for the next edition of its college rankings, the provost announced on Thursday, citing an active institutional review prompted by allegations that the university had provided false data to the magazine. ... Michael Thaddeus, a professor of mathematics at Columbia, this year accused the university of submitting inaccurate information to U.S. News." - Chronicle of Higher Education, 6/30/22

"'Culture' is often the reason given for campus conflicts over issues such as free speech. But they aren’t really cultural issues; they’re economic ones. As the bad economic news keeps rolling in for U.S. colleges and universities (from the Big Quit and inflationary pressures to the demographic cliff), it’s important to keep in mind that economic realities, not cultural ones, largely underpin volatile campus political dynamics." - The Hill, 6/30/22