The English departments of Cornell and Harvard have dropped the Graduate Record Examination (GRE) requirement for graduate applicants—a noteworthy move that amounts to a setback for the quality of education and a win for diversity and lower standards.

Insidehighered.com reports the Cornell development and includes a link to a candid statement from the English department about its motives. The professors voted overwhelmingly to drop the two tests involved, the general one (with the mathematical, verbal, and analytic sections) and the subject one (a multiple-choice test of literary-historical knowledge and literary language comprehension).

The main reason, the statement says, is this:

GRE scores are not good predictors of success or failure in a Ph.D. program in English, and the uncertain predictive value of the GRE exam is far outweighed by the toll it takes on student diversity.

Yes, diversity—that’s the issue. The statement doesn’t get specific about diversity, preferring instead to highlight cost and access, but we may be sure that what troubles the department most is the racial proportions that the test delivers.

The score gap between white and black test-takers is significant, and it’s relentless anxiety for educators who believe in equity and social justice. The Cornell faculty signal that commitment with the requisite and properly solemn declaration at the end of the statement of the department’s “larger mission.” Those who think that the purpose of graduate training in English involves instruction in literary history, literary analysis, research methods, and teaching methods apply a narrow, overly professional understanding of the mission. The statement broadens that traditional definition into a wholesale social and political endeavor:

to direct the force of language toward large and small acts of learning, alliance, imagination, and justice.

This is one of those breathy moral declarations that only an elite academic could make. To those of us with common sense, the inflation of what a small humanities Ph.D. program at an Ivy League school does into a “force of language toward . . . justice” is a self-congratulatory absurdity. Language like this is merely progressivist bureaucratese.

Behind the pomposity, however, is sober dismay. The GRE exam is a threat to diversity and justice for the simple reason that the score gap between whites and blacks is so large. (See, for instance, Table 1.3 in this report from ETS.) If GRE scores are included in the application, admissions committees have a harder time recruiting from this latter group, which remains profoundly underrepresented in the overall doctoral population. Better to drop the whole thing, to kill the messenger than to try to downplay the score gaps during the applicant screening process.

The move is a sign of deep frustration. Despite the 50-year push toward diversity in the literary curriculum, especially the inclusion of more Anglophone and African American literature on the syllabus, along with steady efforts of affirmative action in admissions not only in graduate school but at the undergraduate level as well, the results for English remain demoralizing.

[How Diversity Hijacked History 101 and All the Humanities]

According to the Survey of Earned Doctorates, in 2017 there were 1,465 total doctorates awarded in “Letters” in the United States. “Letters” includes the fields of English and American literature, classics, comparative literature, rhetoric, and composition. Of that total, only 45 PhDs went to “Black or African American” students. In other words, only three percent of the recipients fell into that demographic group.

For the subfield of “English literature, British and Commonwealth,” we have 369 doctorates awarded. Only seven of that year’s honors went to “Black or African American” students.

English professors look at those numbers and shudder. After all this time and effort, they say to themselves, having made their fields oriented around identity concerns (race being the leading marker), they still can’t attract more than a handful of that favored demographic. What more can they do to show that they care, that their labors do aim for “large and small acts of learning, alliance, imagination, and justice”?

With those distressing rates of completion in hand, the faculty have an easy decision to make. Dropping the GRE is a no-brainer. With so few African American students earning an English Ph.D., the departments absolutely must lower the bar of entry. This is especially true in an era of decline in undergraduate English majors. As you can see from the chart below, from 2011 to 2017, the change in the number of degrees awarded in English fell by more than 20 percent. 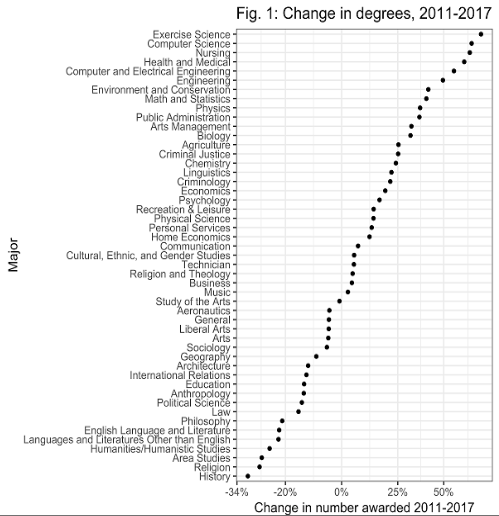 According to a report from the Council of Graduate Schools, applications in all the arts and humanities fell three percent from 2012 to 2017. That was the worst rate of all the fields; overall, graduate applications are up.

That means graduate programs in English must hustle to keep the pipeline running. They can’t sit back as they did in the Golden Age of Enrollments (the Sixties, mostly) and let the students line up outside their doors. They are losing market share, and competition over under-represented groups is stiffer than ever.

The GRE doesn’t help. The test is, in fact, a fair assessment of what it tests for—verbal skill and analytical talent on the general exam, literary historical knowledge and literary reading comprehension on the subject exam—and those aptitudes and acquisitions are crucial to the quality of the field in future times. But other exigencies displace them right now. It’s a different numbers game: how many applicants do we have, and how many African American students can we admit?