Despite being a small minority (5.8%) of the U.S. population, Asian-Americans have long been, and remain, at the center of current controversies over college admissions.

Consider the relationship, if any, among the following:

Could Harvard possibly be trying to court favor with the court considering its discrimination case by suddenly admitting more Asians? Could the rapidly increasing number of selective institutions deciding to drop their SAT/ACT test requirements possibly have anything to do with those tests producing uncomfortable numbers of highly qualified Asians and less qualified blacks and Hispanics?

Perish the thought … at least if you are confident our holier-than-thou, holistic, “inclusion”-demanding diversifiers would never do anything to exclude any racial or ethnic group (except whites; see, in that regard, William Voegeli’s excellent article, “Racism, Revised”). If, on the other hand, you are not so confident that today’s diversifiers are above putting high barriers in front of some groups on their road to engineering more “diversity,” then preserve the thought and take a look (for many readers, take a renewed look) at the recent history of admitting Asian Americans to selective institutions.

That history begins, and may end, at Harvard — originator of “holistic” admissions as a way of restricting the admission of Jews in the 1920s, and, as indicated by the evidence presented in the recently concluded SFFA v. Harvard College, practitioner par excellence as a way of putting a ceiling on the admission of Asians.

The two most dramatic revelations in that evidence are 1) that Asian American applicants consistently have the highest academic qualifications but the lowest ratio of admissions of any group, and 2) that the primary mechanism Harvard uses to reduce their number is its own admissions officials awarding them lower “personal” evaluations (usually without meeting them), claiming that they come up short in such characteristics as “courage, kindness, likability.” Also emphasized by the plaintiffs, and equally revealing though less often discussed in the voluminous coverage of the case, is a third element: the almost eery consistency of the proportion of Asian admits over time.

Between 2003 and 2012, the SFFA Complaint noted, “the percentage of Asian Americans at Harvard wavered only slightly above and below approximately 17 percent … despite the fact that, by 2008, Asian Americans made up over 27 percent of Harvard’s applicant pool, and approximately 46 percent of applicants with academic credentials in the range from which Harvard admits the overwhelming majority of students.”

[Reminding Us Why Racial Preferences Are a Bad Idea]

That consistency, as the SFFA Memorandum in support of its motion for summary judgment stated, was no accident. Harvard “manipulate[s] the process so that it achieves essentially the same racial balance year over year. If, at the end of the admissions process, Harvard has admitted more (or less) of any racial group than it did the year before (what it deems, in violation of Title VI, to be ‘too many’ or ‘too few’), then it reshapes the class to remedy the problem.”

The remarkable consistency of Harvard’s Asian-American admits emphasized by the plaintiffs was highlighted in an influential 2012 article by Ron Unz, who pointed out that the proportion of Harvard’s Asian-American admits had been rising steadily throughout the 1980s, finally peaking at about 21% in 1993. “However, from that year forward, the Asian numbers went into reverse, generally stagnating or declining during the two decades that followed, with the official 2011 figure being 17.2 percent.”

Even more striking, he continued, “has been the sheer constancy of these percentages, with almost every year from 1995–2011 showing an Asian enrollment within a single point of the 16.5 percent average, despite huge fluctuations in the number of applications and the inevitable uncertainty surrounding which students will accept admission.”

After peaking in 1993 the percentage of Asians attending Harvard “dropped by over 50%” in the following years. That pattern of increasing Asian admissions followed by a long period of virtually constant lower numbers replicated the same pattern regarding Jewish admissions documented by Jerome Karabel’s impressive 2005 book, The Chosen: The Hidden History of Admission and Exclusion at Harvard, Yale, and Princeton. In fact, Unz noted in a New York Times article in December 2013, “this decline in relative Asian-American enrollment was actually larger than the impact of Harvard’s 1925 Jewish quota, which reduced Jewish freshmen from 27.6 percent to 15 percent.”

Of course, Harvard was not alone in imposing an Asian ceiling, as shown in the following chart Unz provided showing the same pattern at other Ivy League schools … and a very different pattern at Caltech, a very selective school which does not hand out admission benefits and burdens based on race. 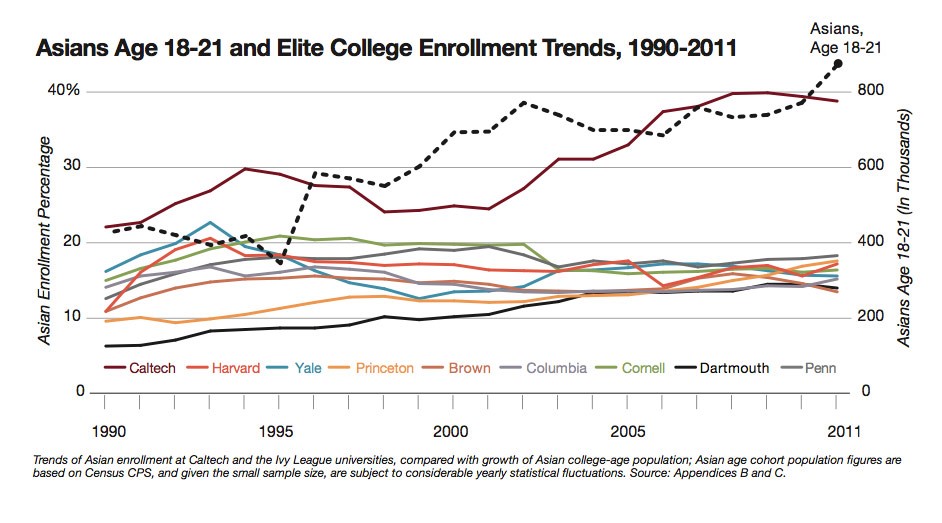 Unz found the constancy of the Asian numbers at Harvard and the other Ivies “particularly strange” because the Asian American population — doubling since 1993 — had increased so dramatically. Indeed, he noted, “the college-age ratio of Asians to whites increased by 94 percent between 1994 and 2011, even while the ratio of Asians to whites at Harvard and Columbia fell over these same years.”

Althea Nagai found the same pattern in a recent (May 2018) report for the Center for Equal Opportunity, “Too Many Asian Americans: Affirmative Discrimination in Elite College Admissions.” 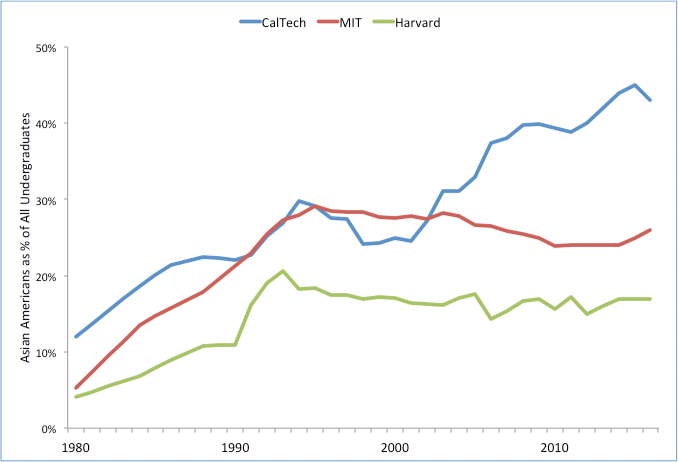 Caltech has no affirmative action, and Nagai’s chart shows a rapid increase in Asian students at Caltech, now more than 40%.

Summarizing her findings, Nagai concluded that “the number of Asian Americans at certain elite institutions has remained steady or somewhat declined over the past 20 years. This appears at least in part to be a function of holistic admissions and a school’s diversity goals, which entails the use of negative racial preferences against Asian Americans.”

In his earlier analysis, Unz reached the same conclusion. “On the face of it, ethnic enrollment levels which widely diverge from academic performance data or application rates and which remain remarkably static over time provide obvious circumstantial evidence for at least a de facto ethnic quota system.”

Similarly, in his expert report for the SFFA plaintiffs, Duke economist Peter Arcidiacono found that “for the 20 years from the Class of 2000 through the class of 2019” the Asian-American admit rate is below the total admit rate in every year,” the “only one of the four major racial groups to consistently be below the average for the class,” which, Arcidiacono concluded, “points toward a potential ceiling on the Asian-American admit rate.”

Summarizing the research of its experts and others, perhaps the central charge in the SFFA Complaint is that “Harvard is engaged in racial balancing.”

Over an extended period, Harvard’s admission and enrollment figures for each racial category have shown almost no change. Each year, Harvard admits and enrolls essentially the same percentage of African Americans, Hispanics, whites, and Asian Americans even though the application rates and qualifications for each racial group have undergone significant changes over time. This is not the coincidental byproduct of an admissions system that treats each applicant as an individual…. Harvard’s remarkably stable admissions and enrollment figures over time are the deliberate results of systemwide intentional racial discrimination designed to achieve a predetermined racial balance of its student body.

Ironically, what may be the strongest evidence that for decades Harvard achieved virtually unchanging percentages of Asian-American admits is that, recently, perhaps in response to litigation and other pressure, those formerly consistent numbers have grown rather sharply.

After remaining remarkably stable from 1993 through 2014, consider the proportion of Asian-American admits since then:

In his December 2013 New York Times article quoted above Ron Unz noted that Harvard’s admission of Asian-Americans, which had peaked at 21% in 1993, began its decline, hovering close to 16.5% for two decades, “after the Justice Department closed an investigation in the early 1990s into charges that Harvard University discriminated against Asian-American applicants.”

Would Harvard, the inventor of “holistic” evaluations, try such a favor-seeking stunt? Once again, perish the thought.

Finally, rather than haughtily and hotly denying the obvious, perhaps it would have done better to fess up and admit, “Yes, we used to discriminate against Asians, but we’re not doing it anymore, or at least not as much.”

3 thoughts on “Harvard Flinches and Admits a Few More Asians”