Home » Articles » The Disingenuous Exhortation to a Contemplative Discourse

The Disingenuous Exhortation to a Contemplative Discourse

“I see no value in participating in a Star Chamber that starts by convicting me and many others for the crime of not being black.”

Our academic institutions fail us when their leaders abandon facts, analysis, and discourse in their zeal to replace merit and genuine multicultural respect with so-called diversity, equity, and inclusion (DEI). To be clear, when universities refer to “equity,” they mean outcome-determinative proportionate quotas by which admissions, hiring, and promotions are determined by ethnicity, gender fluidity, and disabilities, rather than merit, seniority, or other traditional criteria.

Shortly after George Floyd’s death, my inbox was inundated with secular homilies from every academic and cultural institution with which I am associated. Similar missives soon arrived from professional organizations and businesses.

The invariable thesis was that the deaths of Mr. Floyd, Breonna Taylor, and Ahmaud Arbery revealed deep, intractable flaws in American democracy and society, particularly white privilege, that laid bare the insidious tentacles of systemic racism. These seers presumed to speak for their institutions’ extended communities in affirming these new universal truths and the urgency for change, insincerely encouraging reflective dialogue and demanding penance through DEI preferences and other reparations.

Minding the Campus is not the forum in which to discuss whether racism exists in America, and if so, whether we should seek its eradication. It does and we should. Rather, this article uses my interactions with Columbia Business School to illustrate the hypocrisy of elite universities that feign interest in discourse and critical thinking while ignoring, mischaracterizing, and fabricating facts and silencing opposition in their accelerating roll-out of DEI preferences at the expense of merit.

The following proclamation from Columbia Business School Dean Costis Maglaras is typical of the cookie-cutter messages from Columbia’s schools and organizations: 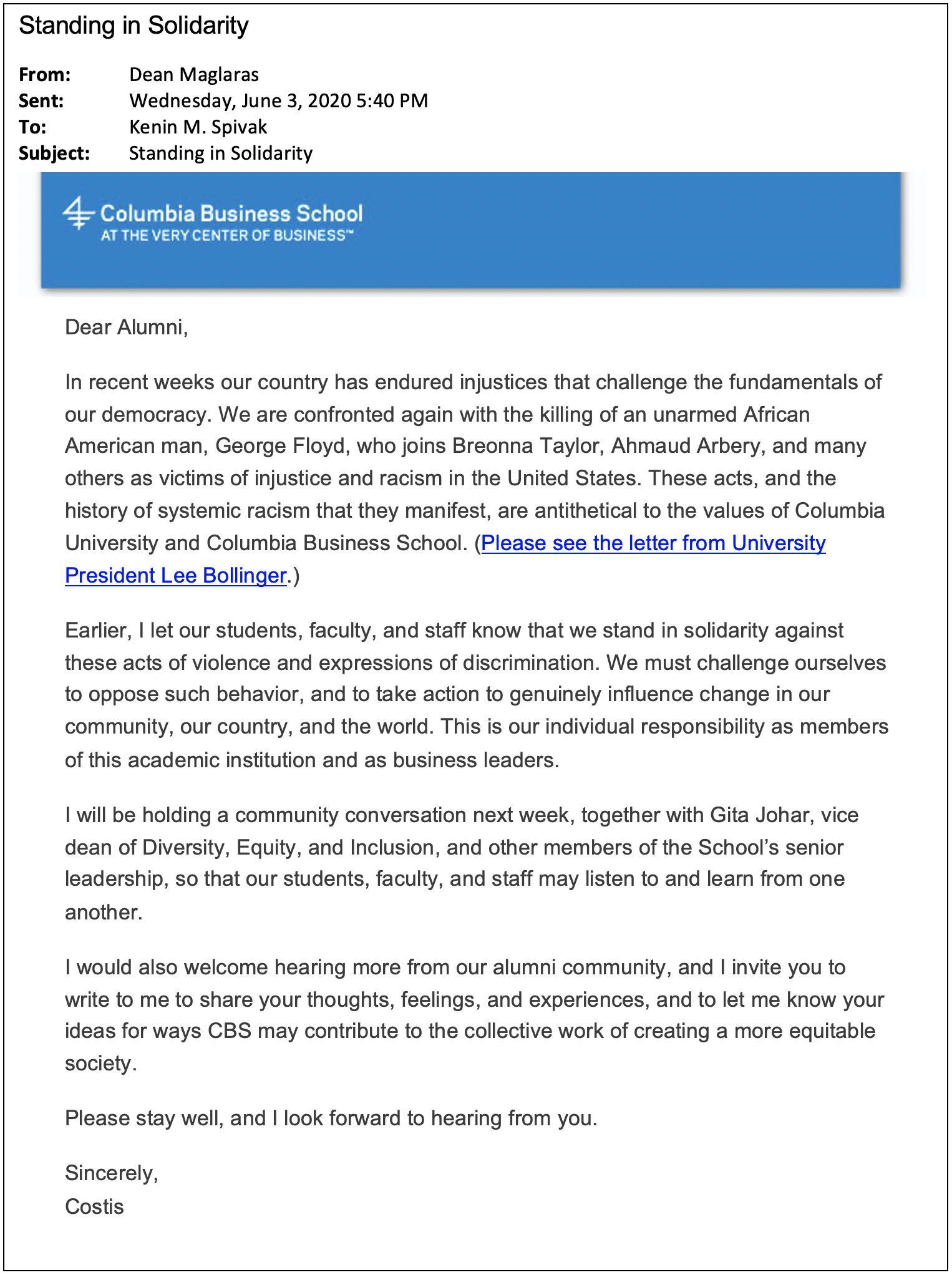 Dean Maglaras’ decree and its many clones were widely disseminated at a time when basic questions about these incidents remained unanswered. There was, for example, no evidence that Derek Chauvin had acted out of racial animus. Ms. Taylor’s death resulted from compound errors, including her boyfriend’s opening fire on police; but, again, there was no evidence of a racial motive. A racial motive is very likely in Mr. Arbery’s murder. However, he was not killed by police.

Polls show that liberals and those who get their news from left-leaning media repeatedly overstate the number and percentage of blacks shot by police, as well as the propensity of police to use force against unarmed black suspects.

A Skeptic Research Center survey published in February 2021 found that 53.5% of respondents self-identifying as “very liberal” and 39% of those identifying as “liberal” estimated 1,000 or more unarmed black men were killed by police in 2019. The respected Washington Post database reports just 13 such deaths, though Skeptic posited that when all law enforcement agencies update their numbers, the total might reach 60 to 100.

From 2015 to 2020, about 27% of the victims of fatal police shootings were black. Yet, in the Skeptic study, those identifying as “very liberal” estimated 60%, “liberals” estimated 56%, and even “conservatives” estimated 38%.

A Heartland Institute/Rasmussen Report national poll in May 2021 had similar results, showing the misconceptions of those surveyed who obtained their news from left-leaning cable networks.

With a woke abjuration of the facts and the law, George Floyd’s death is used to conclusively prove the pervasiveness of systemic racism and to confirm that only racists oppose massive DEI preferences, among other reparations. Few can afford the career- and reputation-ending risk of the axiomatic counter that, in a civil society, facts and law are critical to developing policy. See the National Association of Scholars’ database “Tracking Cancel Culture in American Higher Education.”

Nevertheless, I have repeatedly endeavored to engage in the discourse unseriously requested in the numerous self-flagellating epistles I receive. Dean Maglaras asked for input, but provided only the general alumni department email address. I located Maglaras’ email address and replied as follows (my reference below to Columbia President Lee Bollinger should be understood in the context of his message, referenced in Dean Maglaras’ email above, and his role as the named defendant in the landmark Supreme Court affirmative action cases Grutter v. Bollinger and Gratz v. Bollinger): 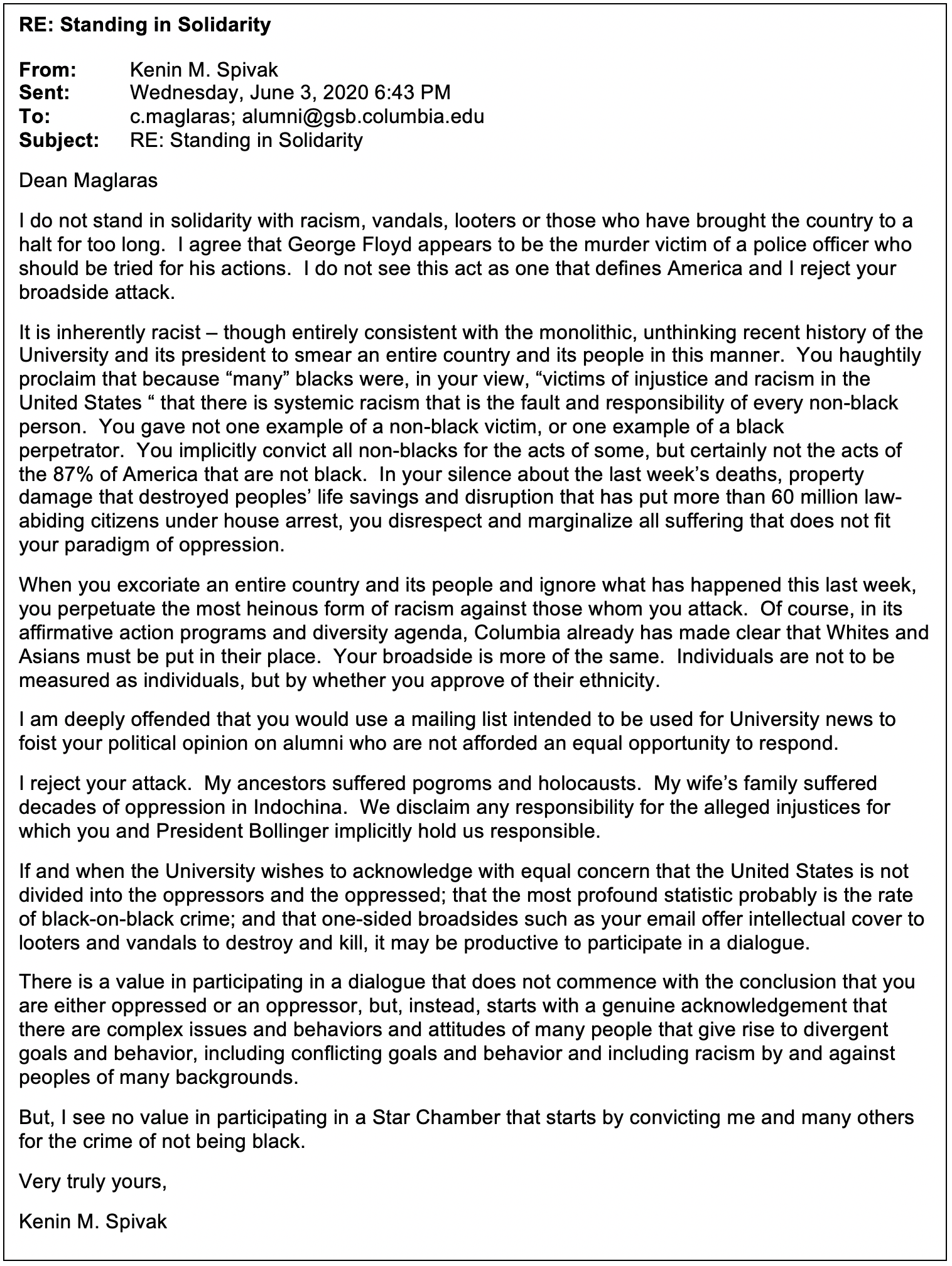 Dean Maglaras never responded. Instead, without copying him, Beth Brown, Columbia Business School’s vice dean for external relations, and Gita Johar, vice dean for diversity, equity, and inclusion, sent me a brief email that linked to Columbia’s values policy and that falsely asserted the “facts…are not in dispute” as to an “act of violence committed against an unarmed black man.” Putting aside that many facts were then disputed or unknown, the crucial fact relevant to Columbia’s assertion of systemic racism was whether Mr. Chauvin’s actions were racially motivated. When Columbia issued its many statements, Mr. Chauvin’s motive was a mystery. It remains so today. I include Vice Dean Brown’s and Johar’s response below: 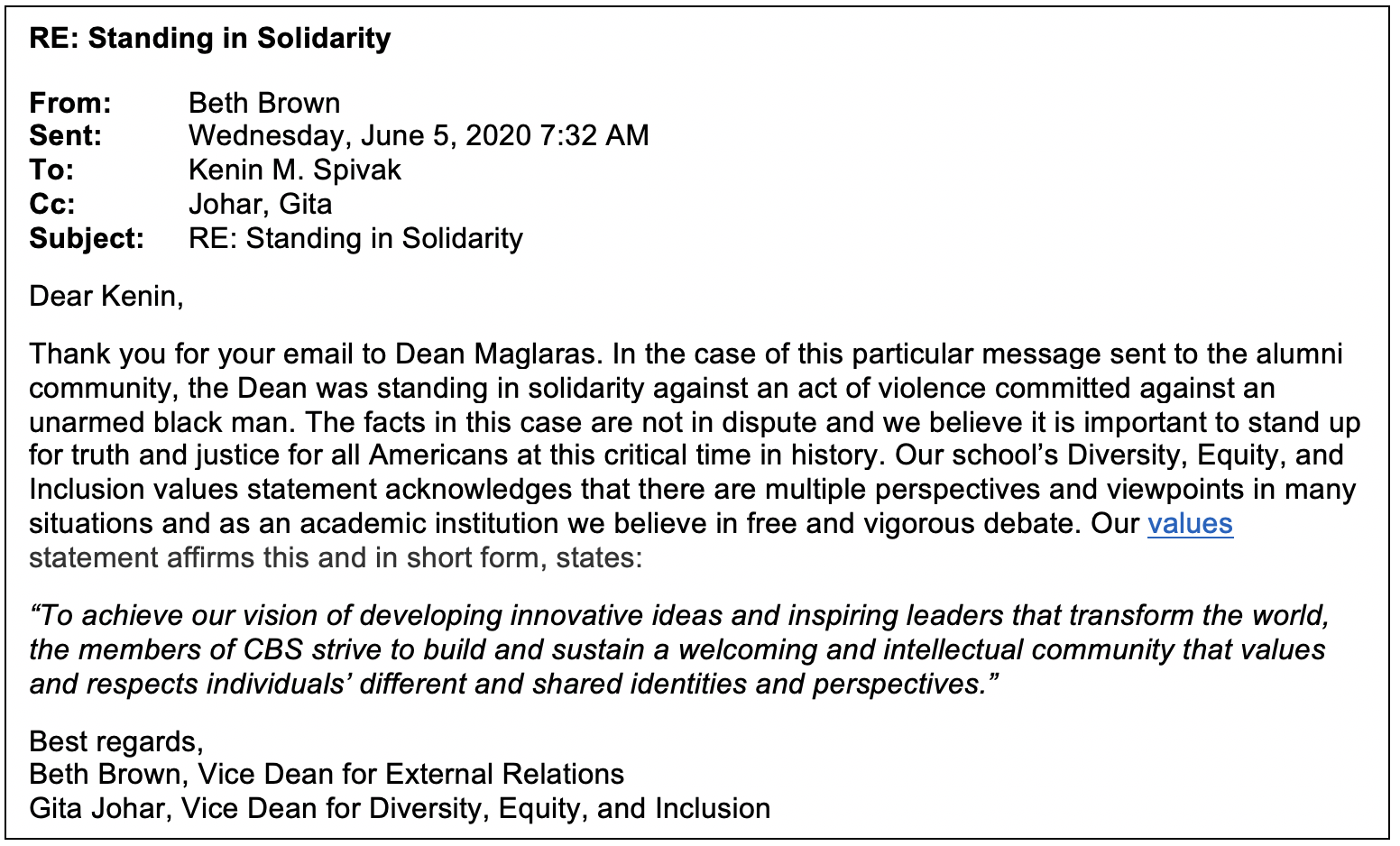 I continue to receive guilt-ridden apologia that presume America to be deeply scarred by systemic racism and that claim DEI and other reparations are essential first steps to absolution. Increasingly, the haunting notes of Critical Race Theory shape the narrative.

With retribution and the fear of retribution silencing dissent, particularly in academia and the arts, and as repugnant as the factual, legal, and policy infirmities of this dogma may be, it is profoundly disturbing that instead of protecting the raison d’etre of elite universities, which surely includes fostering vigorous debate, critical thought, and analysis, the insufferably woke leadership of our elite universities is closed to any information or opinions except their own. None of the deans, presidents, or executive directors who exhorted me to engage in a contemplative discourse are willing to do so.

Dean Maglaras asked for input on “ways [Columbia Business School] may contribute to . . . creating a more equitable society,” not on the threshold questions. Those are doctrine. The discussion is about steamrolling over facts and analysis to efficiently implement their DEI nostrums.

Our universities refuse to consider the legitimacy of their cause (purported systemic racism), or the constitutional, social, and economic consequences of their solution, including well-documented harms for the groups they seek to advantage. That is not happening because, as it has always been for those with grand racist visions, facts, law, and principles are roadkill.

I leave you with my final response to Vice Deans Brown and Johar. (By addressing my salutation below only to Vice Dean Brown, I inadvertently implied that there is a racial basis to the creation of her position at Columbia. My intention was to refer to Vice Dean Johar’s position, which is, by definition, consumed with dividing people by their skin color.) 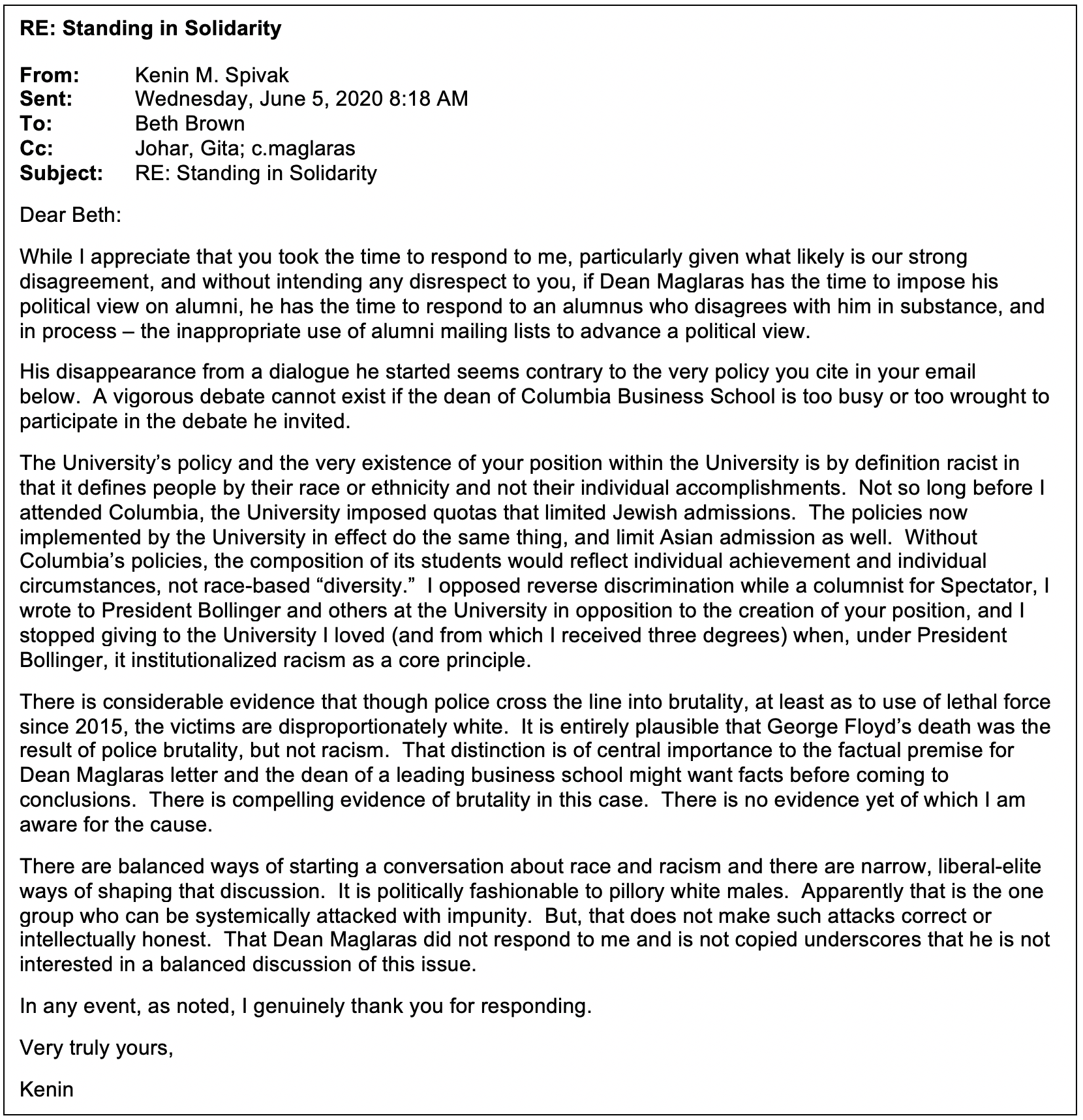 Kenin M. Spivak, a lifetime member of the National Association of Scholars, is founder and chairman of SMI Group LLC, an international consulting firm and investment bank. Spivak was chairman of two publishers and of the Editorial Board of the Knowledge Exchange Business Encyclopedia. He regularly contributes to National Review, The American Mind, and other publications. He received an A.B., M.B.A., and J.D. from Columbia University.

2 thoughts on “The Disingenuous Exhortation to a Contemplative Discourse”