Details are starting to emerge about the Biden administration’s plans for free community college. According to a story in Inside Higher Ed by Alexis Gravely, the key details include:

What should we make of this plan?

1. The Biden plan is a solution in search of a problem—on average, we already have free community college. 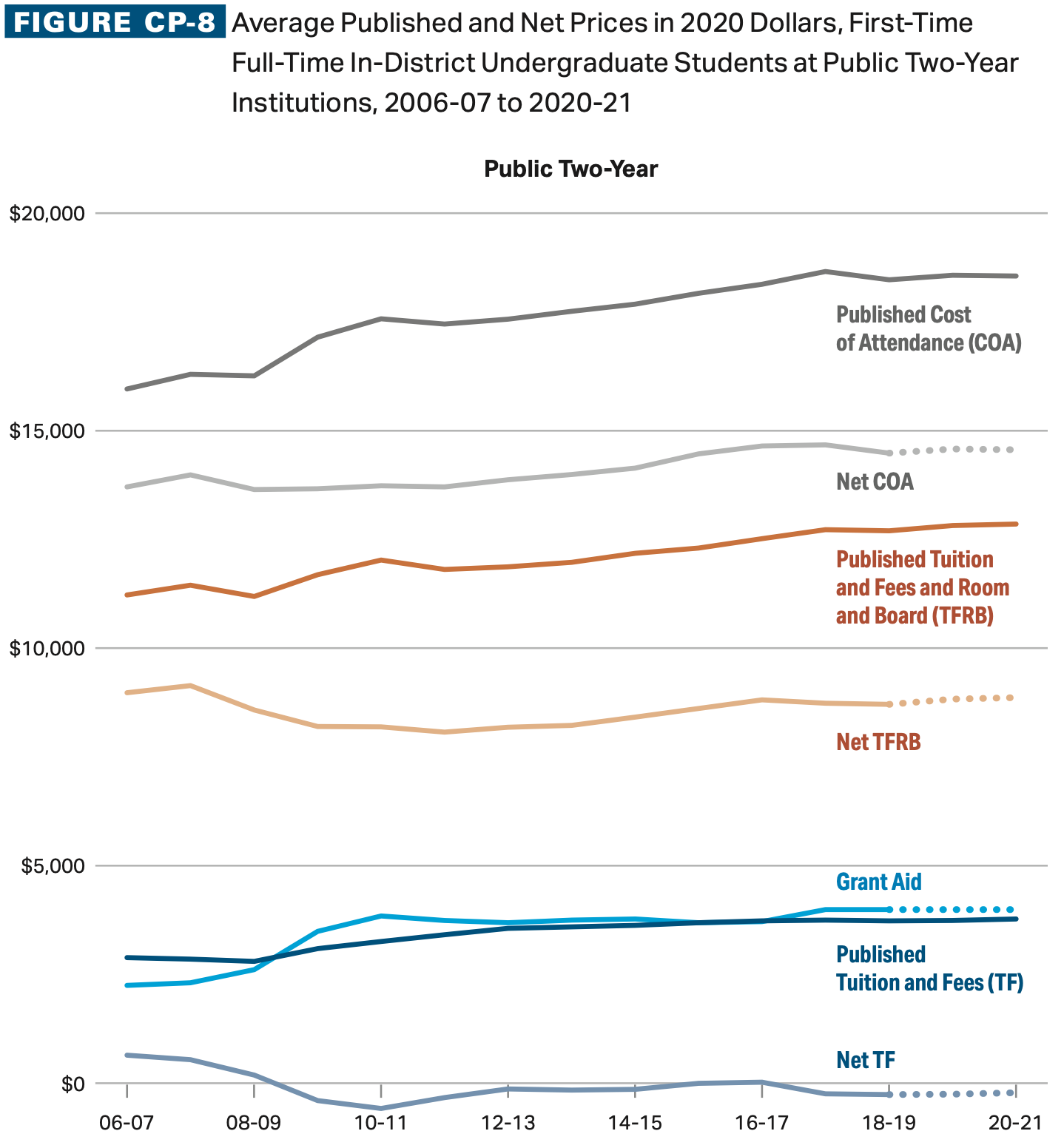 Source: Trends in College Pricing and Student Aid 2020, The College Board

Increasing the Pell grant would allow more students to access free community college. But the Biden plan instead relies on starting numerous federal-state partnerships as well as new methods of disbursing and tracking funds, which will likely face stiff political opposition.

Wouldn’t it be better to rely on Pell grants, which have already produced de facto free community college, have strong bipartisan support, and have a proven track record?

3. The Biden plan does not provide free community college.

4. The Biden plan would not fuel tuition increases (the Bennett Hypothesis is not a concern).

While I’m pretty skeptical of the Biden plan in general, one of the things it gets right is its double protection against the Bennett Hypothesis. One of the biggest problems with federal financial aid programs is the incentive it gives colleges to strategically raise prices (a phenomenon known as the Bennett Hypothesis). This problem has plagued most federal aid programs, but in a development that I hope carries over to all future financial aid programs (and reforms existing ones), the Biden plan includes two mechanisms that short-circuit this tendency.

The first mechanism is price controls. Requiring participating states to set community college tuition and fees to $0 will ensure that the grant does not simply result in colleges raising tuition. While I’m opposed to price controls in general, when a government is providing massive subsidies to producers, it is absolutely kosher for a government to place restrictions on the prices those institutions can charge. In fact, most states already do this, restricting how much state universities can charge as a condition of receiving state appropriations. The federal government has historically avoided the need to do so by providing funding to students instead of colleges or states, but if it starts funding colleges or states, it should arguably mimic the state restrictions on pricing.

5. The median cost mechanism is on the right track but is botched.

The second mechanism that, if properly applied, would limit potential tuition increases in response to the new aid is the median cost feature, in which the amount of the grant is determined by the median cost among states.

The Bennett Hypothesis arises because aid eligibility is currently determined for each college separately. If a college raises tuition by $1, students automatically become eligible for $1 more in federal financial aid. This allows colleges to raise tuition without substantially reducing the number of students who can afford to attend. As I’ve argued before, using the median cost of college among colleges (rather than the cost at each specific college) would short-circuit the Bennett Hypothesis. This way, if a college raises tuition, its students no longer automatically qualify for more aid.

However, the median should be calculated based on student enrollment. Instead, the Biden plan would calculate this median among states. As New America’s Kevin Carey documents, this was done because California has a ton of community college students (around 2 million) and doesn’t charge much, so the student enrollment-weighted median would provide a much smaller grant. This would further show Point 3, above, that this plan doesn’t actually provide free community college.

6. The plan might lower funding for community colleges in some states.

The plan includes a maintenance of effort provision, meaning that states would need to spend at least as much money on community colleges going forward as they did in the past. But the plan also eliminates a revenue source for community colleges (by requiring $0 tuition and fees), and then gives the money that is intended to offset this loss of revenue not to the colleges, but to the states. Given that community colleges are widely viewed as being under-resourced from these same state governments, why should we expect that this new money will flow entirely to community colleges? It is even possible that some states would participate in the program, but then divert the grant money elsewhere, leaving community colleges with even less financing than today (since they would lose all tuition revenue).

Overall, the Biden plan seems like a bad idea. The problem it seeks to solve is largely non-existent. To the extent there is a problem, there are better solutions for addressing it, and it might end up harming community colleges in the long run.