The notion that states have been cutting funding for higher education, commonly referred to as state disinvestment, is widespread within academia and the media. These cuts are alleged to be responsible for much of what ails higher education, especially the rise in tuition. Consider, for example, some recent statements from education leaders:

• Ted Mitchell, president of the American Council on Education, wrote that “over the past several decades, many state legislatures have largely walked away from their responsibility to provide adequate funding for their states’ public universities. State disinvestment is a major driver of rising tuition prices at public colleges and universities—and a big reason why many students have been forced to borrow more to pay for college.”

• Kevin Miller, associate director of higher education at the Bipartisan Policy Center, wrote that “college costs and student debt continue to rise, and cuts in state funding for higher education have been a major reason why.”

These are not one-off tweets by random strangers, but authoritative statements from people who’ve been in the industry for years and who should have an accurate view of long-term trends. Moreover, they are repeating what’s been the conventional wisdom for years, namely, that states have been disinvesting in higher education for decades.

There’s just one problem—state disinvestment is a myth. In this case, a picture really is worth a thousand words, so just look at the graph below, reproduced from my new report that shows inflation-adjusted state funding per student from 1980 to 2021. 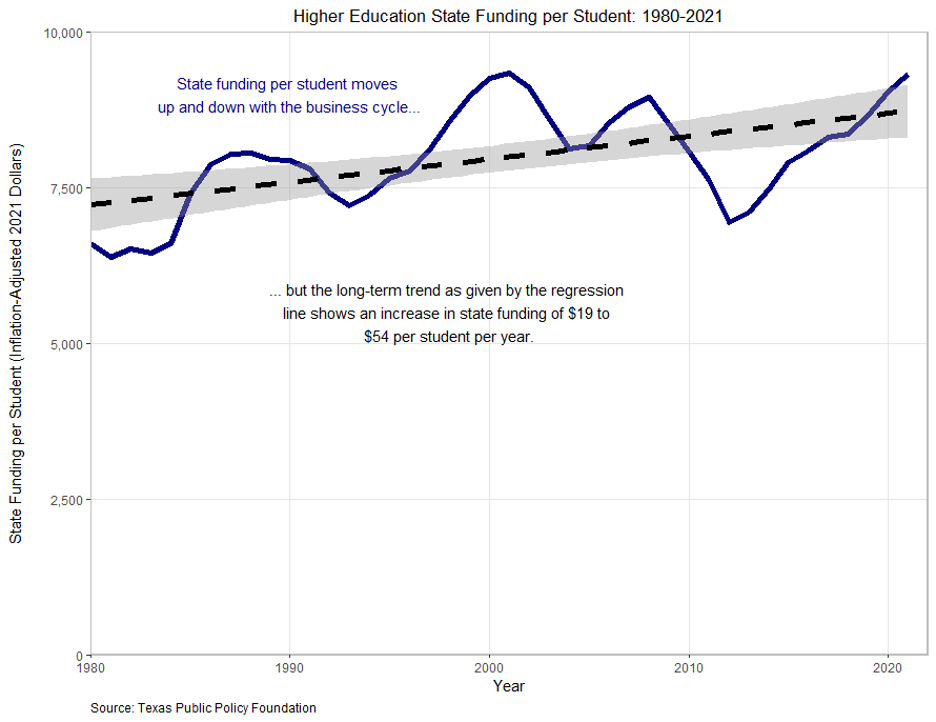 If state disinvestment were real, then there should be a clear downward trend. Not only is there no downward trend, but the statistical evidence points 180 degrees in the opposite direction—there is, in fact, an upward trend. In other words, far from disinvesting, states have been increasing their investments in higher education over the last four decades.

The conventional wisdom is wrong. State disinvestment is a myth.

[Related: “GI Bill Benefits are Compensation, Not a Loophole”]

There are two main reasons why the belief in state disinvestment is so widespread. First, as the second graph (also reproduced from the new report) shows, there are times when states do cut funding, typically during and after recessions (indicated by the grey vertical lines). If you asked a college administrator about state funding in 2012, he would have just experienced some of the largest cuts in history for four straight years. These cuts get a lot more attention than the slow and steady increases in normal years, leaving the impression that funding declines are typical—even though they aren’t. 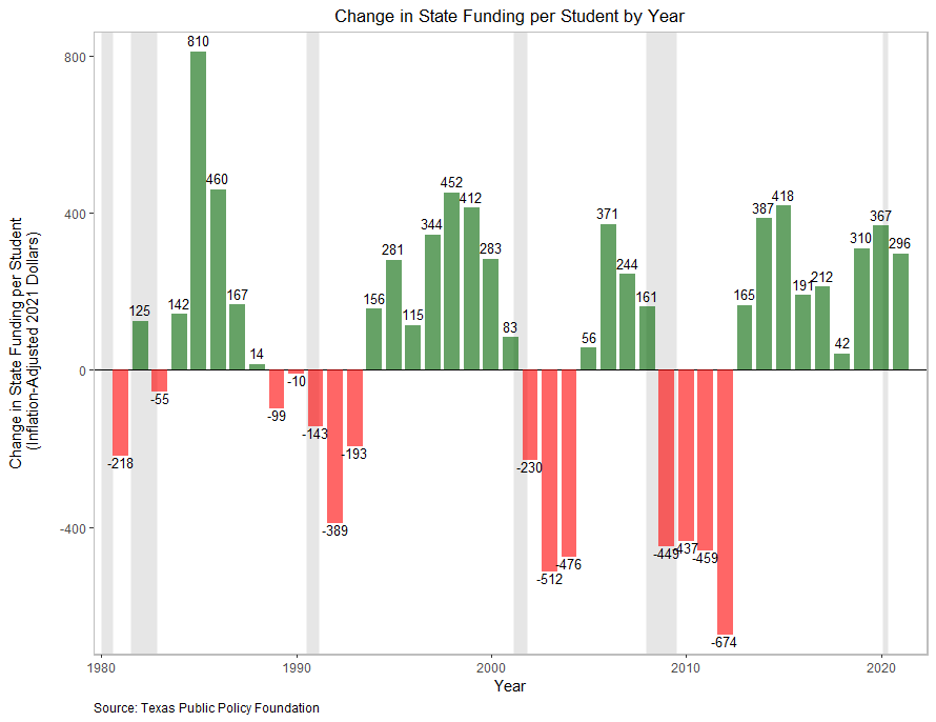 The second reason many people believe in state disinvestment is a failure to adjust for inflation. Most claims of disinvestment cite the annual State Higher Education Finance (SHEF) report published by the State Higher Education Executive Officers Association (SHEEO). The SHEF report does not adjust for inflation using a standard price index like the Personal Consumption Expenditures Price Index (PCE). Instead, it uses a homemade price index, the Higher Education Cost Adjustment (HECA), to adjust for costs. Needless to say, this is not standard operating procedure, and it leads to completely unreliable estimates. As I wrote in the new report,

As an aside, what is SHEEO’s response to my legitimate criticisms? SHEEO’s Sophia Laderman claims that my “paper is really trying to cherry pick and push a narrative.” The charge of cherry-picking is either remarkably uninformed or a lie. Cherry-pickers love to choose beginning and ending dates that conform to their story. Yet my paper uses two methods that make cherry-picking impossible. First, I used all available data, spanning four decades. If you cut down the whole orchard, you aren’t cherry-picking. Second, I use a regression to determine the long-run trend. Regressions are not unduly swayed by beginning and ending values. Either of these would render the charge of cherry-picking false. Using both, as I did, renders the charge laughably dishonest. Either Laderman doesn’t know this, which is concerning, or she does know it and chooses to make false accusations anyway, which is even more concerning. As for the narrative I’m pushing, I’m searching for the truth by following the data, something I would hope SHEEO tries to do as well.

It is alarming that the consensus view on state funding—that it has been decreasing for decades—is so out of touch with reality. Most people probably cite the SHEF report without realizing that it doesn’t adjust for inflation. Others suffer from confirmation bias, uncritically accepting any information like the SHEF report that is consistent with their preconceived notion that states have cut funding. And a few may know better but choose to spread disinformation because it advances their ideological or political cause.

Misjudging the direction of historical state funding will obviously affect policy decisions regarding future funding, but the flawed conventional wisdom distorts other policy conversations as well.

Improving college affordability should be a high public policy priority, so the question of why tuition has increased so much is of crucial importance. According to state disinvestment proponents, the answer is simple. Tuition increases to make up for state funding cuts (see the Mitchell and Miller quotes above). But this couldn’t be further from the truth. Tuition has been increasing, but so has state funding. If tuition changes to offset changes in state funding, then tuition should be falling, not rising. For example, in 1980, state funding per student was $6,605. In 2021, it was $9,327. If tuition merely offsets changes in state funding, then tuition should have fallen by $2,722. Instead, tuition rose by almost $5,000 (from $1,745 to $6,723). Clearly, increases in tuition cannot be explained by nonexistent cuts to state funding.

"As of Tuesday, 31 public colleges and dozens of private institutions in the Sunshine State—including the University of Florida, Florida A&M University and the College of Central Florida—had announced they were closing their campuses for part or all of the rest of this week to prepare for the hurricane, which was expected to grow to a category four by landfall." – Inside Higher Ed, 9/28/22

"Simmons University has canceled a course taught by an instructor accused of making racist social media posts when he taught at nearby Harvard University. The instructor, David Kane, was not renewed by Harvard following a 2020 controversy in which students alleged that he’d made racist posts on his blog using a pseudonym." – Inside Higher Ed, 9/28/22

"It is interesting but depressing to me that the more eminent a college or university is perceived to be, the more outrageous are efforts by administrators to stifle individual expression and enforce a numbing conformity of ideas reminiscent of universities in the old Soviet Union or Nazi Germany." – James G. Martin Center for Academic Renewal, 9/28/22

"The book’s publisher, Wiley, had withdrawn the book, along with more than 1,300 other ebooks, from ProQuest Academic Complete, a large multidisciplinary ebook collection to which the university had a paid subscription. The change took effect on the last day of August, right before the start of fall classes. As a result, librarians and faculty members in the United States and beyond have scrambled to identify alternative textbook options for their students." – Inside Higher Ed, 9/28/22

"A lawsuit seeking to block President Biden’s plan to cancel some student debt claims the policy is not only illegal but could inflict harm on borrowers in some states who would be forced to pay taxes on the forgiven amount. The lawsuit, filed in U.S. District Court for the Southern District of Indiana on Tuesday, is the first significant legal action seeking to invalidate Biden’s policy before it takes effect. " – Washington Post, 9/27/22

Florida governor wants to stop colleges from taking money from ‘countries of concern,’ including China

"Florida Gov. Ron DeSantis, a Republican, said he will propose legislation that would ban colleges in the state from accepting money from seven 'countries of concern,' including China. The other countries DeSantis said pose a threat are Cuba, Russia, Iran, North Korea, Syria and Venezuela, all of which his office described as having 'nefarious intentions.'" – Higher Ed Dive, 9/27/22

"President Joe Biden’s student loan forgiveness plan will cost the U.S. government about $400 billion over the next three decades, the nonpartisan Congressional Budget Office estimated in a report released Monday. According to CBO’s estimates, 95% of student loan borrowers meet the plan’s income criteria, which limits forgiveness to those earning up to $125,000 annually, or $250,000 for married couples filing jointly." – Higher Ed Dive, 9/27/22

Teacher, Staff Shortages Reported by About Half of Schools, Survey Finds

"More than half of principals said their schools were understaffed at the start of the current school year, according to a survey published Tuesday in the Education Department’s first national examination of the school staffing problem since the pandemic began. The National Center for Education Statistics survey of 904 principals conducted in August found that 53% of principals felt their schools were short workers ... " – Wall Street Journal, 9/27/22

"A Virginia teachers’ union leader argued that competition between public schools and private educational options is bad for students during a recent interview. David Walrod, president of the Fairfax County Federation of Teachers, a local affiliate of the American Federation of Teachers, which is shepherded by Randi Weingarten, told John Stossel that the public school system should monopolize K-12 education in the United States." – National Review, 9/27/22

"The University of California, Los Angeles announced Tuesday that it is buying two sites from the defunct Marymount California University for $80 million. UCLA said the land acquisition — the largest in its history — will expand access to education at the university. The purchase will enable UCLA to add almost 1,000 students, and the sites may be able to host academic programs next year." – Higher Ed Dive, 9/27/22

How Chinese Students Are Changing Our Colleges

"International students do indeed bring both diversity and new perspectives into the classroom. But while American students are encouraged to study abroad and learn about foreign cultures and languages, students from China are being catered to here by professors and administrators.  Faculty time previously spent on scholarly research is being used for training to 'engage' a certain ethnic segment of the student body." – Mary Grabar, 6/13/16