While President Biden’s proposed student loan forgiveness plan is justifiably getting most of the attention in the higher education policy world, he also proposed a new student loan repayment program that fundamentally undermines a definitional aspect of loans—repayment.

The proposed repayment plan does this by turning virtually every policy lever available to the most generous setting on record. In particular, it would:

• Forgive loans after 10 years of repayment for undergraduates borrowing less than $12,000; and

The plan uses the income-driven repayment method, which is a good thing. Student loans have traditionally operated like mortgages, with a fixed payment for a certain number of years (typically 30 for mortgages and 10 for student loans). This is not ideal since many students will experience employment volatility early in their career, making paying a fixed amount every month difficult. As a result, many students will default because of short-term liquidity constraints (they don’t have $200 for payment this month) rather than because they are insolvent (they can’t afford $200 in a typical month).

Income-driven repayment programs resolve this flaw by setting the monthly payment as a percent of income and letting the length of repayment vary. For instance, I might need to pay 10% of my income. If my income increases, I’ll pay off my loan faster. If my income falls, I’ll take longer to pay off my loan. But my payments will always be affordable because they change with my income. Under income-driven repayment plans, we essentially eliminate all defaults attributable to short-term liquidity constraints. The U.S. and other countries have been moving away from mortgage-like student loans and toward income-driven loans for several decades now.

Unfortunately, these repayment programs have included design features that politicians seeking to buy votes have found irresistible to exploit—the Biden plan exploits them all with gusto. The result is a plan so generous that it barely counts as repayment anymore.

While not a necessary feature of income-driven repayment, plans in the U.S. have historically exempted a certain amount of income, below which the student would not be required to make any payment. There is a good argument for setting the exemption at the poverty line, since requiring payments from those living in poverty seems unnecessarily harsh. While the first plan (Income Contingent Repayment) did use the poverty line, later plans exempted 150% of the poverty line. Biden now wants to make it 225%.

The combination of the larger exemption and the lower percentage of income owed has a dramatic effect on the amount that students need to repay, as shown in the figure below. Each line shows student income and the resulting annual amount paid under the various plans. Raising the income exemption shifts the starting point for the line further up the income distribution, while lowering the percentage of income owed flattens the line. Over time, repayment plans have gotten unmistakably more generous. 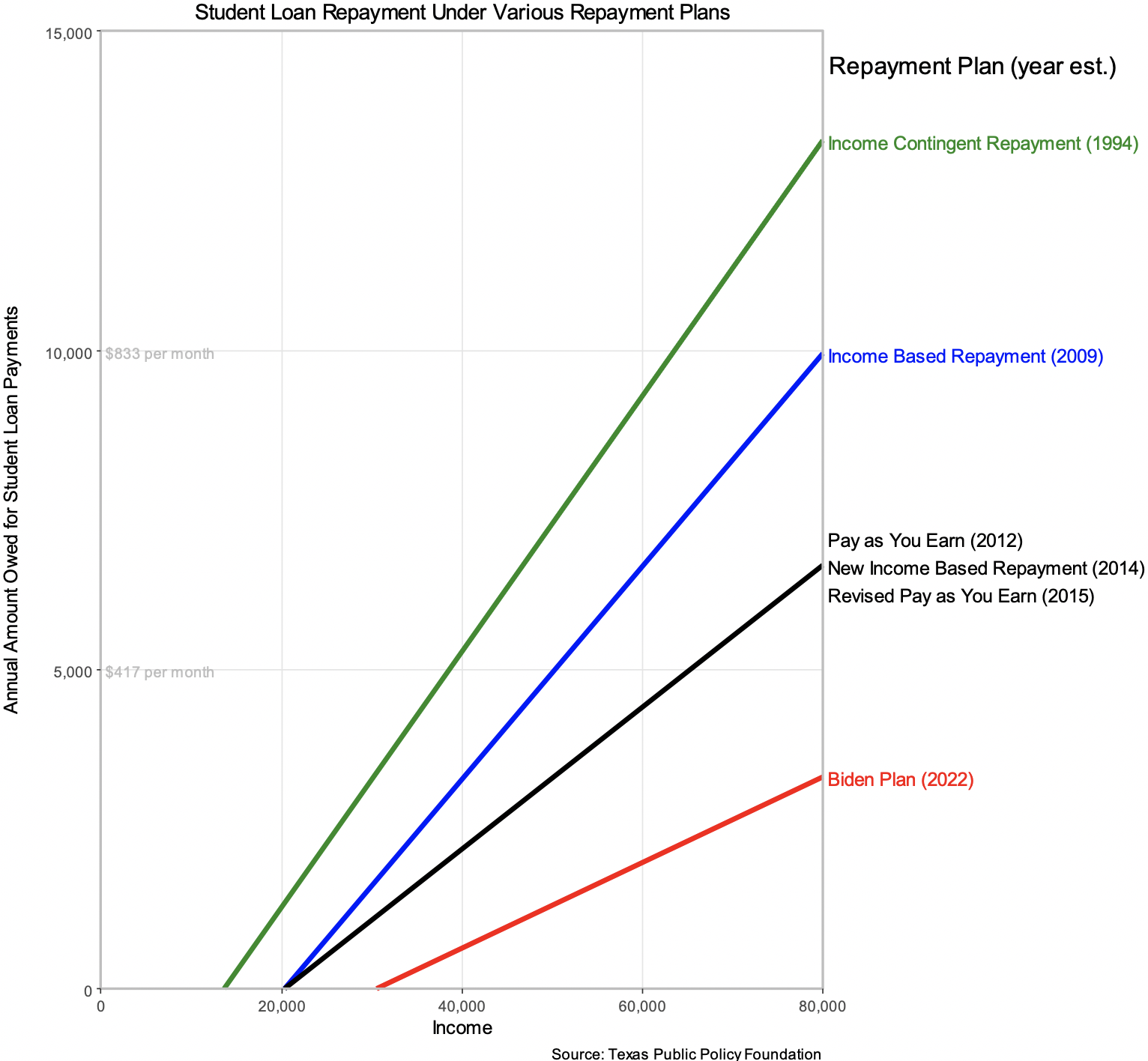 Another way to show this is to compare the payments under various plans for a typical student. Recent graduates with a bachelor’s degree earn a median income of $46,845. Under the Income Contingent Repayment plan, established in 1994, the student would owe $554 per month. Under Income Based Repayment, established in 2009, he would owe $331. Under a host of recent plans such as Revised Pay as You Earn (REPAYE), established in 2015, he would pay $220. Under Biden’s plan, he would pay $68 a month. In other words, the median college graduate with a bachelor’s degree will only owe $68 a month, less than the cost of many cell phone bills and about a tenth of what graduates repaid during the 1990s plan. 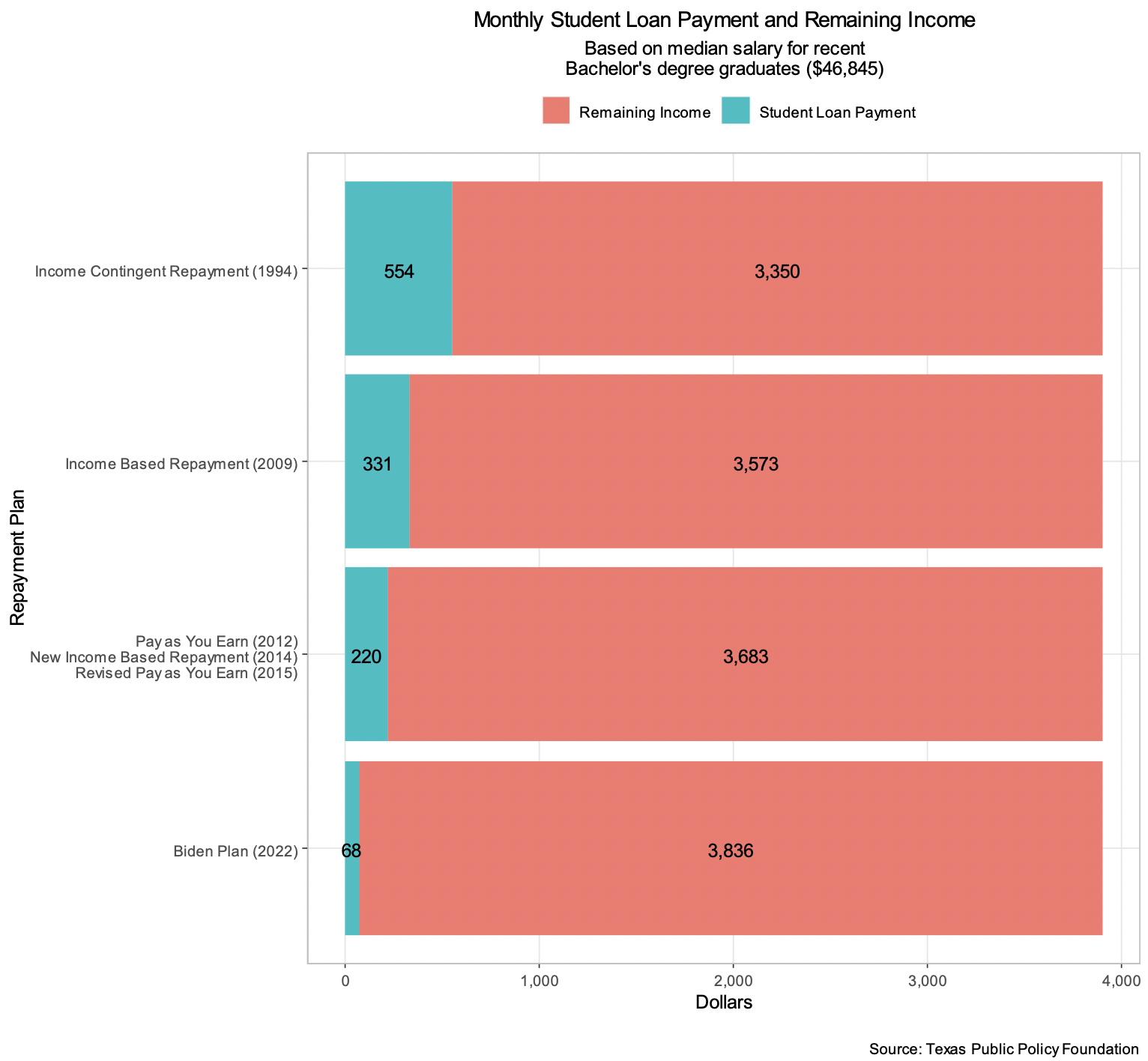 The results are similar for other credentials. The median associate degree recipient will owe only $15 a month. As generous as this is, graduate students benefit even more. The median graduate with a professional degree (e.g., medical doctors or lawyers) borrowed more than $168,000, yet will only have to pay $199 a month.

[Related: “Five Problems with Biden’s Student Loan Forgiveness Plan (And What To Do About Them)”]

The effect of a shortened repayment window in conjunction with the reduction in the percent of income owed is easy to underestimate, as reducing them simultaneously is a multiplier. This is more easily comprehended visually, so the figure below tracks the evolution of these repayment requirements over time, showing the maximum number of years of payments required before forgiveness (assuming the student doesn’t repay the debt before then) and the percent of income due each month under various repayment plans. The shaded region for each repayment plan indicates the amount of a graduate’s income that is utilized for repaying his student loans. 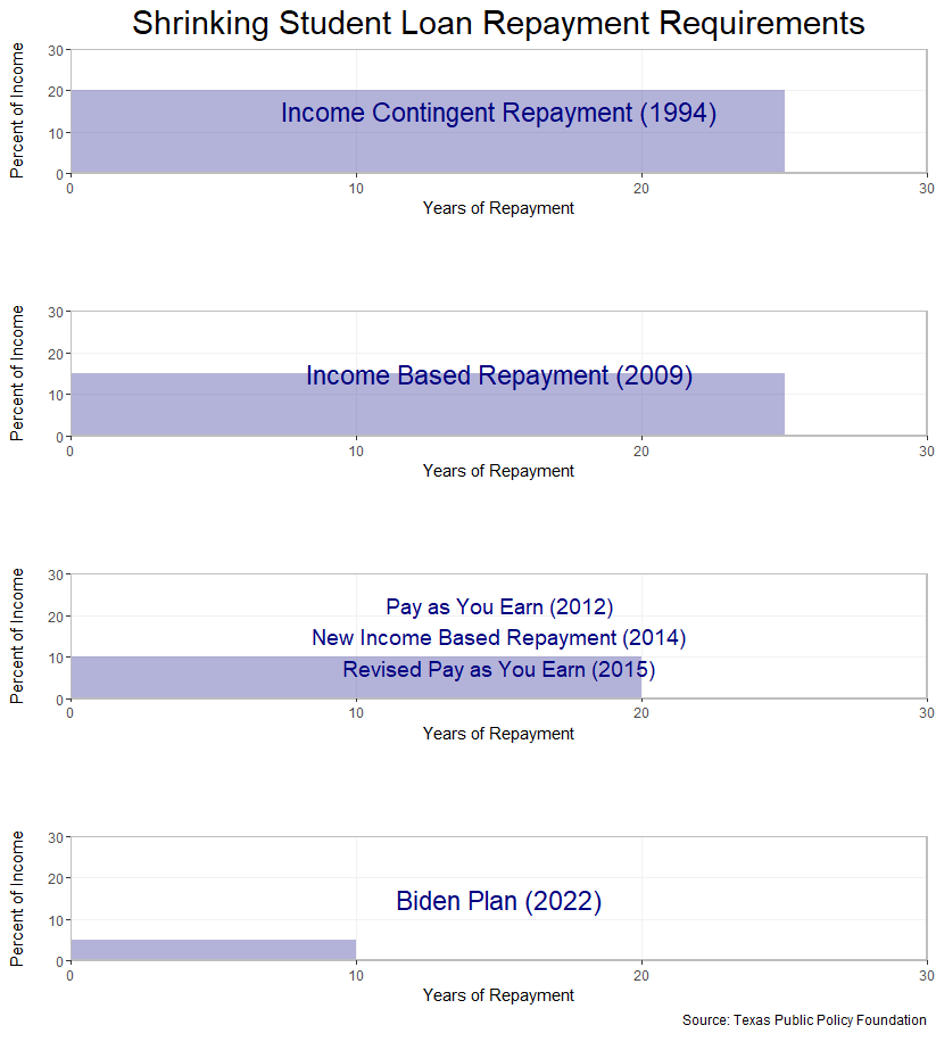 This will have a dramatic effect on students’ incentives to borrow, as well as colleges’ incentive to raise prices. As Douglas N. Harris points out,

Colleges will likewise face stronger incentives to increase their prices, since taxpayers, not students, will be picking up the tab.

Until the Revised Pay as You Earn plan, any unpaid interest was simply capitalized into the principal. REPAYE forgave half of unpaid interest, and the Biden plan would forgive it all. Combined with the forgiveness after ten to twenty years of payments, this means that many students will simply never come close to repaying their loans. As Adam Looney writes, this completely undermines the notion of a loan:

… under the administration proposal a student can borrow significant amounts for “living expenses,” deposit the check in a bank account, and not pay it all back. Gaming the system like this wasn’t possible when students were asked, on average, to repay loans in full, and it’s not a problem in systems where loans are used exclusively for tuition. But that’s not the system we have. Some people will use loans like an ATM, which will be costly for taxpayers and is certainly not the intended use of the loans …

At many graduate programs, for example, a single graduate student living alone will be able to borrow more than $20,000 per year just for living expenses and never pay it back. For perspective, that is about double what a low-income single mother with two children can expect to get from the Earned Income Tax Credit (EITC) and food stamps combined.

In sum, the Biden repayment plan is a misnomer, as only token repayment is required. This plan makes a mockery of student lending, and if it is enacted, the entire student loan system needs to be scrapped at the earliest opportunity.