The common first-year reading for new students at my university this year was a comic book—or a ‘graphic novel,’ in the Newspeak of our contemporary culture. In it, George Takei (Mr. Sulu of Star Trek fame), through a team of ghostwriters, tells a monolithically woke version of the story of Japanese internment during WWII.

First point: This is what we are giving to new students to introduce them to academic life.

I refuse the glorified Newspeak term. I’ve seen the book in question. It’s a comic book, albeit a bit longer than the ones I read when I was in elementary school. Two hundred pages, most of them with word counts in the single or double digits. Some pages with no words at all. If I generously give the book fifty words a page, that yields a word count of about a sixth of what you’d find in a non-graphic novel—that is, a novel—of the same page length.

Here’s the message that this sends to parents: “Send your kids to a pricey liberal arts college, and we will give them books to ‘read’ that have almost no words in them to be read. Such is the level of faith we have in their ability to handle anything approaching serious thinking. Comic books are what they can handle and what we consider ‘higher education.’”

Second point: It is a comic book not only in its paucity of words and abundance of drawings but in the simplicity of its narrative. The story Takei’s ghostwriters tell consists solely of unrelenting racist hatred for the Japanese in U.S. elite circles, with no plausible defense of this policy, however qualified. One doesn’t even have to apologize for the policy to recognize that the truth involved here is far more complicated than this comic book story.

The surprise attack on Pearl Harbor was a wake-up call regarding the daring and technological abilities of the Japanese military, and there were real logistical reasons to fear that the West Coast was vulnerable to espionage. The Japanese government itself was the most important source that had indicated, in cables our military intercepted, that it would endeavor to find potential allies inside the U.S. in the Japanese immigrant community, and it seemed confident it could do so.

There was, in fact, an intelligence program, MAGIC, which at the outset of the war detected large-scale espionage efforts by the Japanese military among Japanese Americans living on the West Coast. David Lowman, a career intelligence officer at the National Security Agency, wrote a fat book (not a graphic novel, but an actual book with lots of words on the pages) of almost 400 pages on MAGIC. He includes many examples of the startling evidence the Roosevelt administration used to assess what they came to believe was a realistic threat.

Lowman’s entire book can be accessed at archive.org. None of the people with public platforms who want to talk about Japanese internment seem to have had even a glance at it. I would bet my entire shrinking retirement account that neither George Takei nor any of the people who produced his comic book have read it. I’d be surprised if Takei is even aware of its existence.

Stunningly, scandalously, when the Reagan administration decided to pay reparations to Japanese Americans affected by the evacuation, to the taxpayer tune of $1.25 billion, no mention whatever was made of the intelligence Roosevelt used to justify the decision. Here’s Lowman:

Seldom has any major event in US history been as misrepresented as has US intelligence related to the [Japanese] evacuation. It has been twisted, distorted, misquoted, misunderstood, ignored, and deliberately falsified by otherwise honorable people.

Do we really imagine that first-year college students are so morally simple-minded that they cannot think about this difficult issue in its full complexity? It certainly does not make one a racist to consider the national existential question of war. One should not enter wars one does not mean to win, and sometimes winning wars requires actions that are not perfectly fitted to moral utopias.

And it was not just the Japanese whom we treated in this manner during wartime. Many Germans and Italians inside the U.S. were also classed as enemy aliens. Many were detained, some even interned. These populations had been here much longer and in much greater numbers than the Japanese, and many were naturalized. Again, we paid large reparations to the Japanese, but we made no apology or payment to the affected Germans or Italians.

War is a mess, and this one was especially messy. College students ought to be required to consider some of the messy complexity. Ideological comic books are hardly the way to introduce college students to the kind of complex thinking required in such situations.

[Related: “A Visit to the Woke Bookstore”]

Our first-year reading program has frankly been something of a woke joke pretty much from the start, invariably featuring simplified leftist ideology in place of careful, honest examinations of hard questions.

I participated in it a few times, entirely to give at least some students a more measured introduction to difficult topics. This was after they were given bad books to read and instructed in discussion sessions by a faculty almost entirely uncritical of those bad books. In one of those sessions, I led them through some of the egregious fallacies in Bryan Stevenson’s Just Mercy, a book that claims the death penalty should be outlawed because it is hopelessly racist. In another, I demonstrated to them that a flippant feminist retranslation of Sophocles’ Antigone had distorted beyond belief some of the most relevant moral elements of the play, including the fact that Antigone can reasonably be read as a conservative challenging the moral relativism of her antagonists. 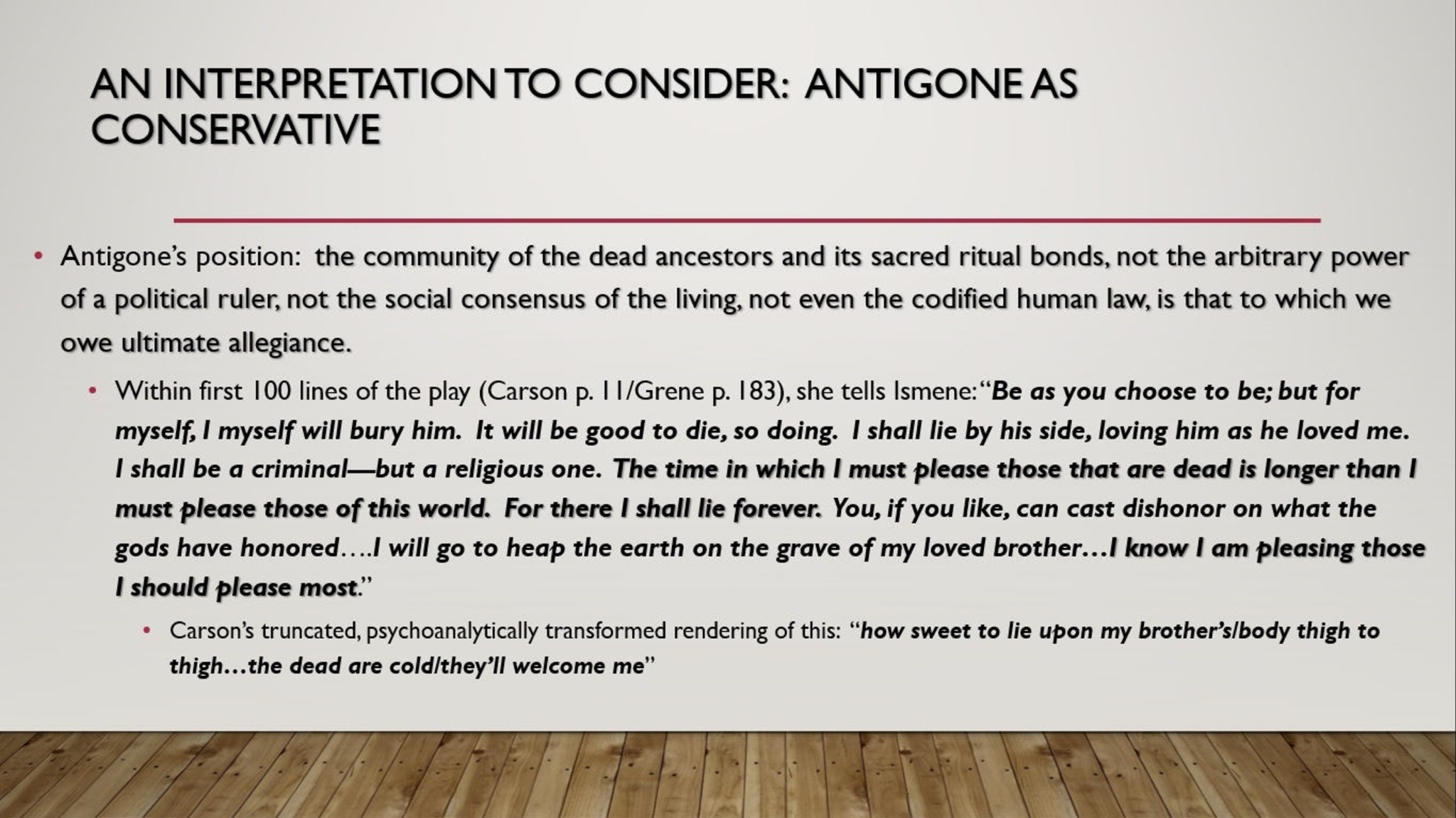 One of the slides I gave students as part of my presentation on Anne Carson’s ghastly retranslation of Antigone.

With this year’s move into the realm of the truly comical, what was already dismal has gotten markedly worse. It is plain that the people who think this comic book introduces students to the rigors of scholarly life themselves know precious little about the subject.

Alexander Riley is professor of sociology at Bucknell University and a senior fellow at the Alexander Hamilton Institute for the Study of Western Civilization. His writing can be found at https://alexanderriley.substack.com/. All views expressed are his and do not represent the views of his employer.