The James G. Martin Center for Academic Renewal recently published a report by Adam Kissel and Harrington Shaw that examines the financial quality of degree programs at North Carolina state universities. The authors use debt-to-earnings ratios, calculated from College Scorecard data, to evaluate the economic returns of these programs. Their report, in addition to providing information useful to prospective students and their families, presents surprising results about the poor financial quality of certain programs. In a state with relatively high-quality public universities, these results should prompt serious re-evaluation of certain degree programs both by prospective students and state lawmakers.

The authors rely on a metric called Debt as a Percent of Earnings (DPE), which is simply the ratio of the median debt incurred by students in a particular program to their annual earnings three years after graduation. Programs provide too little return on investment, both for students who go into debt and for the public which pays for these programs, if the median student loan debt equals or surpasses median annual salaries, and therefore has a DPE of 100 percent or more. The authors further categorize programs as follows:

According to this metric, the most financially risky majors include Mental and Social Health Services, Drama/Theatre, and Fine and Studio Arts. Programs with good economic returns include Economics, Finance, and Math. The full results are reproduced below. 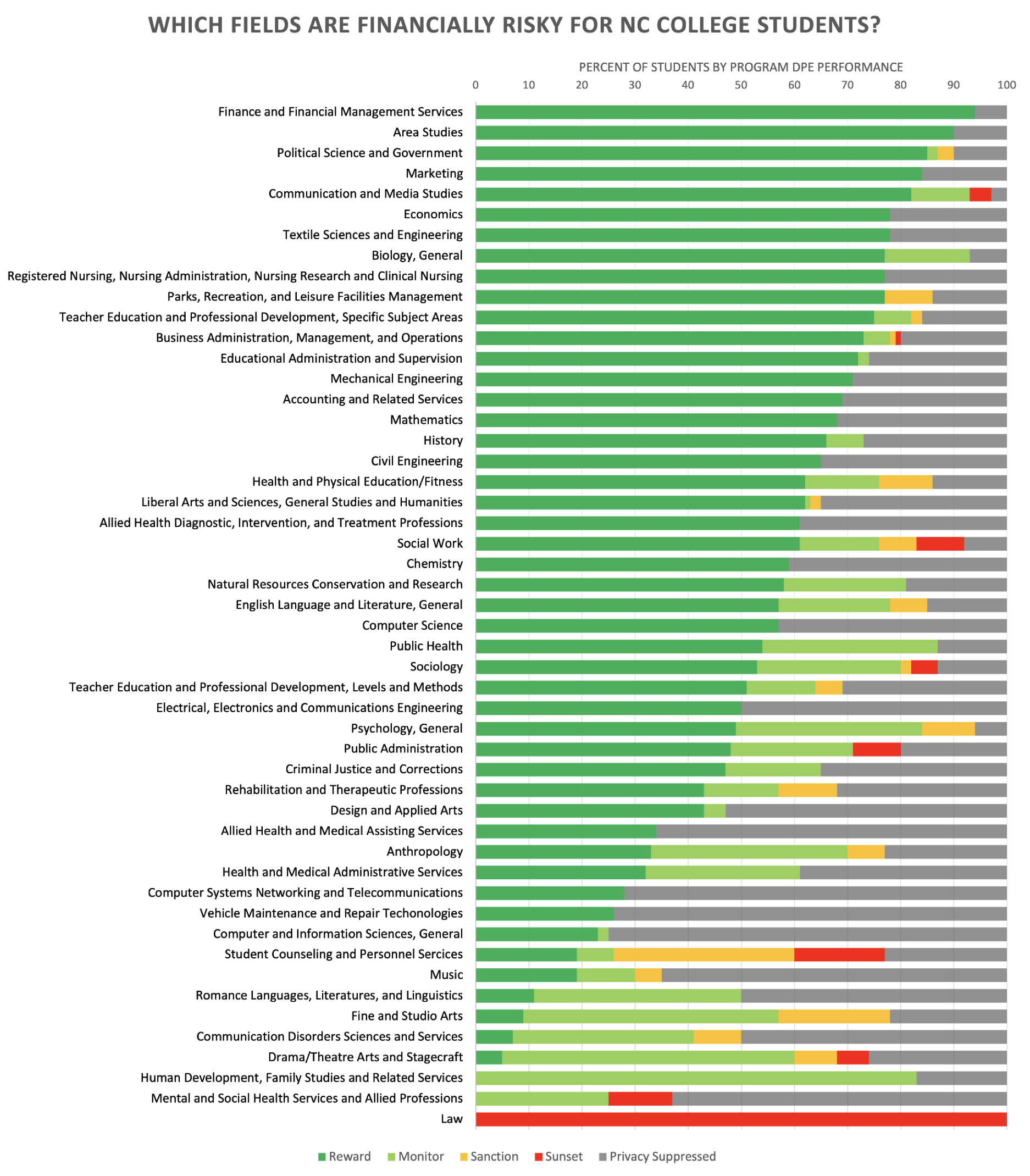 The report also includes a list of fifteen school-specific programs that state lawmakers should eliminate or reform, based on their poor performance on the DPE metric. A bachelor’s degree in dance at the University of North Carolina (UNC) at Charlotte, a master’s in social work at UNC-Chapel Hill, and a bachelor’s in sociology at Elizabeth City State University are just a few of the underperforming programs which are potentially on the chopping block.

Readers might notice that legal programs in the state are the most financially risky educational investments according to DPE. But, as the authors note, this data only looks at earnings three years after graduation. Some professions, such as law, require more time before graduates begin to see higher salaries. That being said, there is significant variation across law schools in terms of their alumni salaries, and more prospective students should be aware of the relatively poor earnings potential of a law degree from a lower-ranked school.

Debt-to-earnings ratio can be a useful tool to identify programs that clearly should be eliminated. This report does a good job of bringing such underperforming programs to the public’s attention. But families should be careful when making decisions between majors using debt-to-earnings data. That’s because debt-to-earnings could be affected by other factors, such as economic backgrounds of students across majors and schools, and scholarships offered by individual universities and departments.

Within the report, a particularly surprising result was that well-performing programs included Biology, Communication and Media Studies, and Area Studies. National data typically show that these programs have low returns on investment.

So what explains this discrepancy?

Take Area Studies as an example. In the report, 90% of students who earned an Area Studies degree in North Carolina graduated from a “Reward” level program. This percentage is much higher than that of Math, which is slightly under 70%. A North Carolina student deciding whether to study Math or Area Studies might settle for the latter, as it appears less risky.

But out of the four state universities which offered Area Studies programs, UNC-Chapel Hill was the only one with available salary information (College Scorecard suppresses data for programs with small numbers of graduates to maintain privacy). Earnings data for Math programs, meanwhile, were disclosed across a variety of state universities. We can make broad conclusions about Math programs in the state, but not about Area Studies programs. Furthermore, when we compare salary and debt information between Area Studies and Math at UNC-Chapel Hill alone, we see that Math majors earn twice as much as Area Studies majors. Both majors incur similar amounts of debt. 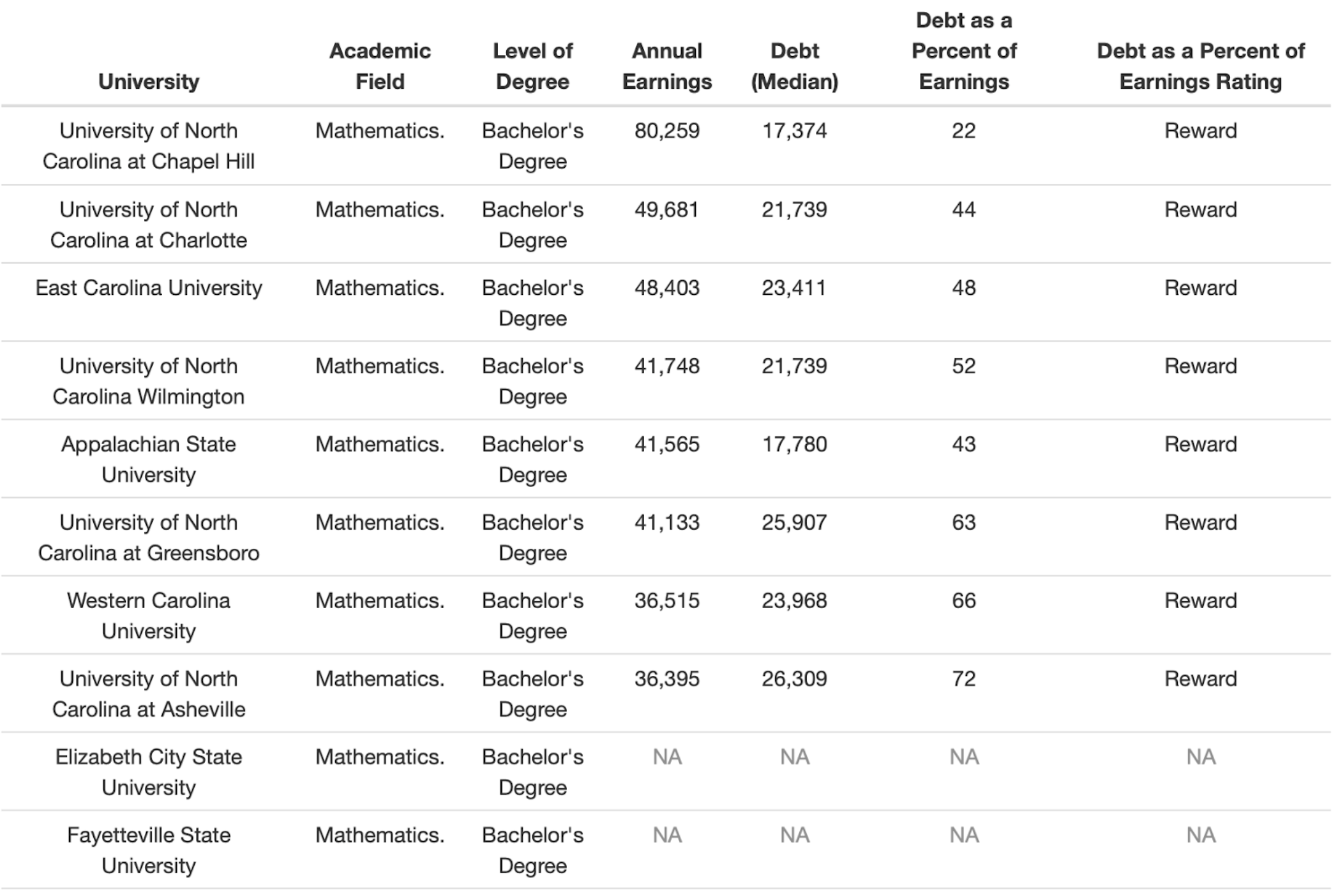 UNC-Chapel Hill also has significantly lower DPEs across most fields compared to other North Carolina state universities. The university may attract wealthier students and more academically prepared students. These students will be more competitive when looking for jobs compared to students who attend lower-ranked universities. UNC-Chapel Hill may also have more funding opportunities than other schools in the state. This allows it to offer larger institutional aid packages, which lowers the debt load for its students. Whatever the reason, it would be a mistake for a student to enter an East Carolina University program using information that applies to the unique circumstances of UNC-Chapel Hill.

Despite these limitations, the authors do a good job of interpreting the available evidence. Their conclusions reflect generally what we would expect based on previous analyses of national data. Their report is a helpful proof of concept for future work that uses this data to help state lawmakers determine funding for universities and for individual degree programs, and to help prospective students and their families make wise financial decisions when applying to college.

Neetu Arnold is a senior research associate at the National Association of Scholars. Follow her on Twitter @neetu_arnold.