A Short Reply to Charlotte

Charlotte Allen‘s response to my recent piece on the denial of accreditation for Ashford contains some good material, but some misunderstanding. My piece is not about whether the Ashford decision itself was flawed–I never stated that WASC was wrong to deny Ashford accreditation and flatly stated: “It is certainly possible that Ashford doesn’t deserve accreditation…” […] 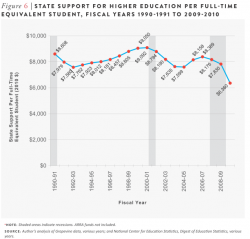 What Cost Shift to College Students and Parents?

A new report from Demos, a policy and advocacy center, titled The Great Cost Shift: How Higher Education Cuts Undermine the Future Middle Class “examines how state disinvestment in public higher education over the past two decades has shifted costs to students and their families.” 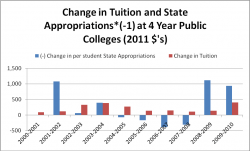 Does Tuition Go Up Because State Funding Goes Down?

Gary Fethke’s recent op-ed Why Does Tuition Go Up? Because Taxpayer Support Goes Down in The Chronicle of Higher Education is an enjoyable read. Rather than dismiss the opposing side’s argument with straw men, as is so common these days, Fethke presents it faithfully and gives it due consideration, which is a breath of fresh […] 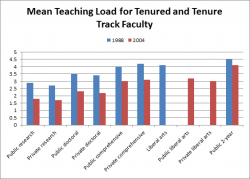 David C. Levy’s Washington Post article, “Do college professors work hard enough?” set off quite the firestorm. His basic point was that we currently “pay for teaching time of nine to fifteen hours per week for 30 weeks,” but that If the higher education community were to adjust its schedules and semester structure so that […]

The Tuition Story That Never Dies

Some commentaries on higher education appear year after year, almost unchanged. One of these hardy perennials is the story that tuition and fees don’t come close to paying for the actual cost of educating college students. In his popular book, The Economic Naturalist, Cornell University economist Robert Frank claims that tuition payments cover only a […]

The Student Loan Debacle–What a Mess

Until recently, much talk about student loans was fact-free: There simply weren’t publicly available figures worth paying attention to. The official balance of student loans from the NY Fed were unreliable: There was a bucket of random obligations called “Miscellaneous”, which included things like utility bills, child support, and alimony. And it turns out that […]

A Simple Solution to a Big College Problem–SURs

Why They Seem to Rise Together:
Federal Aid and College Tuition

It’s called “the Bennett Hypothesis,” and it explains–or tries to explain–why the cost of college lies so tantalizingly out of reach for so many. In 1987, then Secretary of Education William J. Bennett launched a quarter century of debate by saying, in effect, “Federal aid doesn’t help; colleges and universities just cream off the extra […]

A Response to Peter Sacks

I’d like to respond to Peter Sacks’ critique of my new study. Something that I think is lacking from Sacks’ critique is any sort of acknowledgement of what the paper is about. So, for those that haven’t read it yet, here is the basic story of my report… 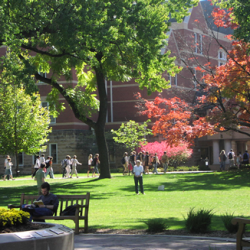 When individuals seek higher education, why should all of us have to pay? After all, individuals decide whether to seek a college degree based on their own calculations of expected costs and benefits. That taxpayers must bear the burden of financial aid to these individuals seems unfair. Given the billions of dollars governments pay individuals […]

The IBR Student Loan Repayment Scheme is a Disaster

The Income Based Repayment (IBR) program, which took effect in 2009, is designed to lighten the student-loan burden for some students. The basic idea is to limit monthly payments to less than 15% of disposable income. If a student makes these payments for 25 years, any remaining balance is forgiven, meaning that taxpayers essentially pay […]

Where’s All the Money Going?

By Andrew Gillen, Matthew Denhart, and Jonathan Robe As they defend tuition increases to irate students and parents, college and university leaders often argue that tuition does not cover their costs and that they are therefore subsidizing their students’ educations. Take, for example, what Southwestern College President Dick Merriman said in an October 2010 piece for The Chronicle of Higher […]

Can We Measure the Value of College Teaching?

By Robert Martin and Andrew Gillen A popular notion within the academy is that teaching quality cannot be measured, but this is an article of faith, not a demonstrated fact. Very few institutions have made a systematic effort to measure teaching quality, largely because the faculty is opposed to it and administrators have little incentive […]

College Is Cheaper Than in the Mid-1990s? No Way

By Andrew Gillen and Robert Martin The annual release of Trends in Student Aid and Trends in College Pricing are big news in the higher education world, and rightly so. Since Department of Education data often take a year or two to become available, these reports provide the earliest and most comprehensive preliminary look at […]

Accreditation: Are the Inmates Running the Asylum?

On paper, accreditation is an amazing system. Among other things, it simultaneously advises colleges on how to improve, enforces a minimum level of quality, provides needed information to policy makers, and protects colleges from government intrusion. It does all this with only a few hundred employees, and a few thousand volunteers. Indeed if accreditation actually […]

The Amazing College Debt Bubble
Teaching One Student Costs Only $1,456 A Year?

News that student loan debt, at $830 billion, exceeded credit card debt for the first time has sparked renewed interest in the financing of college and its implications for students. Largely ignored in the discussion, however, is the shadow debt, which consists of unorthodox methods of borrowing for college, including home equity loans and lines […]

Andrew Gillen of the Center for College Affordability and Productivity wrote this note to Charlotte Allen to clarify comments of his in Allen’s article today on student loans: Charlotte, I saw your article on student loans is up at Minding The Campus. I liked it, but at the very end, you have a long quote […]

The Los Alamos Club: How the People’s Republic of China Recruited Leading Scientists from Los Alamos National Laboratory to Advance Its Military Programs

"Between 1987 and 2021, at least 162 scientists who had worked at Los Alamos returned to the PRC to support a variety of domestic research and development (R&D) programs. Fifteen of those scientists worked as permanent staff members at Los Alamos. Of those fifteen, thirteen were recruited into PRC government talent programs; some were responsible for sponsoring visiting scholars and postdoctoral researchers from the PRC, and some received U.S. government funding for sensitive research. At least one of these staff members held a U.S. Department of Energy (DOE) 'Q Clearance' allowing access to Top Secret Restricted Data and National Security Information." – Strider Intel

How can colleges prepare for the possibility the Supreme Court will strike down race-conscious admissions?

"At a Thursday session of the National Association for College Admission Counseling’s annual meeting, a panelist posed a question to the room: Do you feel prepared if the U.S. Supreme Court were to strike down race-conscious admissions? Not one college enrollment management official raised their hands to say yes. It’s far from a hypothetical, though." – Higher Ed Dive, 9/23/22

"Asian research powerhouses will introduce open-access mandates within the next 'two to three' years, experts have predicted, in the wake of last month’s landmark order by the Biden administration. ... Home to four of the top 10 research-producing countries—China, Japan, South Korea and India—Asia now appears poised to become the next battleground." – Inside Higher Ed, 9/23/22

British Universities Show Why “More” Does Not Mean “Better”

"The Biden administration is seeking to 'cancel' student debt by transferring what individual students owe to the American taxpayer. ... What both sides ought to ask is why we are sending so many young Americans to take college degrees in the first place. If students really are struggling to pay off college debts, does that not raise some fundamental questions about the value of what they are being taught?" – James G. Martin Center for Academic Renewal, 9/23/22

"Some 80 percent faculty members with Ph.D.s in the U.S. trained at just 20 percent of universities. So found the team behind a new study on faculty hiring and retention patterns at Ph.D.-granting institutions. ... Researchers also found that the five most common doctoral training universities—the Universities of Michigan; Wisconsin at Madison; and California, Berkeley; plus Harvard and Stanford Universities—account for one in eight U.S.-trained faculty members." – Inside Higher Ed, 9/23/22

"In a victory for free speech on public university campuses, the University of North Texas has agreed to pay $165,000 in damages and attorneys’ fees for violating a math professor’s First Amendment rights when it fired him for writing a joke criticizing microaggressions on a chalkboard in the teachers’ lounge." – Alliance Defending Freedom, 9/22/22

"Yeshiva University plans to soon restart clubs after reaching an agreement with a group that wants it to recognize a student LGBTQ organization, the university’s lawyers said Thursday. ... Now the university and Pride Alliance have agreed the trial court’s order should be stayed, or put on hold, while appeals are heard — potentially all the way up to the U.S. Supreme Court." – Higher Ed Dive, 9/22/22

"A group of six students at Florida A&M University in Tallahassee filed a class-action lawsuit against the state Thursday alleging decades of discriminatory underfunding of the public historically Black university. The lawsuit, filed in the U.S. District Court for the Northern District of Florida, has many of the hallmarks of past fights in Maryland, Mississippi, Alabama and South Carolina for equitable treatment of public HBCUs." – Washington Post, 9/22/22

"U.S. Senator Josh Hawley, a Missouri Republican, wants universities to pay for student loans in default and the Congress to make other changes to the Higher Education Act of 1965 as part of a new bill introduced Wednesday. Under the Make the Universities Pay Act, a university would have to pay 50 percent of its students’ loan balances in default." – Inside Higher Ed, 9/22/22

"In June, Education Secretary Miguel Cardona proposed rewriting Title IX to better reflect fashions in progressive ideology. Owing to the foresight of his predecessor, Betsy DeVos, the department was required to open a two-month window for public comment. That period closed late last week after over 200,000 comments. Many of the comments expressed alarm — warranted alarm." – National Review, 9/22/22

Why Men Are Avoiding College

"If women were fleeing the nation's universities and colleges, we would have a national uproar, but men are now fleeing in large numbers and society barely notices. Numbers tell the story. Men have been falling behind women for decades. By 2009 National Center for Education statistics for degree-granting institutions listed 11.658 million women enrolled and 8.769 million men. Many predict that women will soon account for 60 percent of our college grads." – Helen Smith, 5/30/13