A Way Past the Asian-American Challenge

There was a thoughtful op-ed in the New York Times last week on the Asian American challenge to admissions procedures at Harvard University.  It was written by a political theorist who teaches writing at Harvard, and it acknowledges that Harvard “engages in ‘racial balancing,’” a procedure that keeps Asian American admissions to the college at a consistent 17-20 percent even […]

How Should We Respond to the UVA Case?

The Rolling Stone exposé of an alleged gang rape at the University of Virginia (and the university’s indifferent response) has received enormous attention. Three pieces analyzing events in Charlottesville and recommending solutions are particularly worthy of note. First, writing in Slate, Dahlia Lithwick (one of Ruth Bader Ginsburg’s favorite legal commentators) noted that the case […]

With apologies to Robert Tracinski. Cheryl Abbate, a grad student teaching “Theory of Ethics” at Marquette University, recently told a student that if he wants to speak against gay marriage, he should drop her class.  We do not know the student’s name but we do know that he secretly recorded the conversation, which took place […]

The Debate at Brown 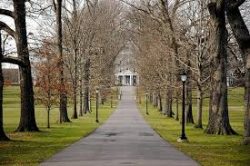 McCarthyite Justice at Wesleyan and Swarthmore

There are two certainties from the current crusade against due process for students accused of sexual assault. First, in coming years, there will be a higher percentage of convictions, since colleges must use the preponderance-of-evidence and are strongly discouraged from allowing accused students from cross-examining their accusers. Second, because so few due process protections exist […]

“The Microaggression Farce,” Heather  Mac Donald’s latest article for City Journal, is getting a lot of attention. It examines one of the more pathetic campus trends, finding  alleged racism in acts so small (or non-existent) that only aggrieved students of color and their allies can spot  them. Mac Donald writes: “As student claims of racial […]

Let’s Not Say ‘Freshman’ Any More

You can’t make this stuff up. Elon University in North Carolina has dropped the word “freshman” and replaced it with “first-year,” according to The College Fix. ”Freshman,” of course, has the deadly word “man” in it. Can’t have that. But there’s another reason for the change: “f——n” ” may contribute to sexual violence on campus […]

In his fine essay in The Case Against Academic Boycotts of Israel, Russell Berman of Stanford University, says this of the boycott Israel movement in academe: “a hatred of knowledge and of reasoned argument pervades its prose.” I thought that characterization over the top until I read this account of a panel on Palestine at […]

An Actual Debate at Brown

Debates on campus are now as rare as white truffles, and the reason is fairly obvious: as essentially homogeneous liberal outposts in a center-right nation, the campuses see no need to allow adversaries and dissidents to speak. So it’s a surprise to see that Brown University hosted a debate on “How Should Colleges Handle Sexual Assault?” […]

Last Saturday, Yale Law professor Jeb Rubenfeld had an important op-ed in the Times discussing the issue of how colleges respond to campus sexual assault. His argument? “Forced by the federal government, colleges have now gotten into the business of conducting rape trials, but they are not competent to handle this job. They are simultaneously failing […]

There have been two major developments in the past week in the fight against racial and ethnic preferences in university admissions. First, last week, in Fisher v. University of Texas, the U.S. Court of Appeals for the Fifth Circuit denied further review of a panel decision that had rejected the challenge to that school’s use […]

The “Truthy” Project Will Monitor Your Tweets

The“Truthy” project at Indiana University should have set off alarm bells right at the start. Described as a research project to study how memes spread on social media, it was created in 2010 by university computer science professor Filippo Menczer, and began tracking “suspicious memes,” and “false or misleading ideas” on Twitter. So far it […]

The New York Times has followed the issue of campus rape for a number of years without mentioning the shaky procedures and lack of due process  in college  hearings on sexual assault. The first acknowledgement we have seen in the Times that these hearings  are basically unfair came in a Sunday Review opinion piece November […]

When the history of folly in college accreditation is written, the Southern  Association of Colleges and Schools will command attention for its outstanding mishandling of academic fraud at the University of North Carolina, Chapel Hill. Nearly three weeks after news broke of the imaginary classes and unearned marks for athletes at UNC, the accreditor acted–by […]

In 2011 two of New York City’s prized taxi car medallions sold for $1 million dollars apiece. In June 2013, another went for $1,050,000. These high prices weren’t terribly surprising, since taxi drivers can only legally pick up passengers if they possess medallions. Some are beginning to think of college degrees in similar terms. As […]

Since the UNC athletic/academic scandal has faded, the hottest topic in the realm of higher education has been the so-called “gainful employment” regulations released by the Department of Education at the end of October. An avalanche of articles have been written exploring the issue involved, namely the large percentage of students who graduate from occupational […]

Science students generally receive an abysmal education in the humanities. Having recently published an article on science education in Public Discourse, I was especially sensitive to comments by Gilbert Meilaender in The New Atlantis, “Who Needs a Liberal Education?” After stating the importance of historical development in the humanities, Meilaender writes, “But a physics undergraduate […]

Should We Erase the “Gender Gap” in Grades?

Has Stanford Law stopped discriminating? I realize this is a loaded question, but it is inescapably prompted by research, published in the Journal of Legal Studies, that suggests “ways to close the gender gap in law schools.” Stanford law professors Mark Kelman and Daniel Ho examined 15,689 grades assigned by 91 instructors to 1,897 Stanford […]

Let the Sunshine In

I’d like to add this to Peter Augustine Lawler’s legislative agenda:  As long as university officials take race and ethnicity into account in admissions decisions, a bill requiring publication of the use of such preferences is necessary. Such a bill would require universities that receive federal funding to report annually in detail on whether and […]

The Republicans’ massive victory on all levels of American politics requires them to be more than anti-Obama or anti-progressive. They must implement policies that will contribute to the flourishing of all of American life. “Reform conservatives”–such as Ramesh Ponnuru and Yuval Levin–have taken the lead in showing that Republicans have to do more than cut […]

As part of its ongoing series on “Inequity In Silicon Valley,” USA TODAY published a long and questionable article Monday, “How To Close The Tech Diversity Gap,” reporting on a conference at the Stanford Law School the paper co-sponsored with Stanford last week. The Rev. Jesse Jackson was much in evidence, both in spirit and […]

In the mid-1990s, the MacArthur Fellows Program, commonly referred to as the “genius grants,” appeared to be captured by the multicultural, race-and-gender left.  But the program director that embraced the radical left, Catharine Stimpson, left the MacArthur Foundation in 1996 after only four years.  Her successor, Daniel Socolow, severely restricted the fellowships going to liberal […]

Toward Intellectual Diversity in Law School

The Federalist Society last Saturday sponsored a symposium at Yale Law School that discussed “Achieving Intellectual Diversity” on law school faculties.  On one of the panels, I said that as a student at Yale law 1977-1981 (with a year off to work for the Republican National Committee)  it was a good time to be in […]

The Smearing of Patrick Witt Continues

When Patrick Witt published his op-ed on what was done to him in a sexual assault hearing at Yale, he had to know that the critics would emerge from the woodwork. And so they have. The New York Times continues to stand behind its botched reporting on the case, which even the Times’ public editor […]

Common Core–The Elites Did It

At the invitation of the Alabama chapter of Eagle Forum—Phyllis Schafly’s pro-family conservative organization—I flew to Birmingham last week to give a talk on the Common Core K-12 State Standards.  Alabama was one of only a few states I had never set foot in.  When I mentioned that to an elderly gentleman I met at […]

The Quarterback Smeared by Yale Speaks Out

Perhaps the highest-profile victim of the war on campus due process, former Yale quarterback Patrick Witt, has spoken out publicly for the first time. In an op-ed for the Boston Globe, Witt, now a student at Harvard Law School and prompted by the law school faculty’s speaking out against Harvard’s new policies, wrote that Yale’s […]

Stanford student Elisabeth Dee, class of 2016, one of the organizers of a demonstration called “Carry that Weight” where students were urged to carry a pillow or mattress around for a day to symbolize the burden placed upon survivors of sexual assault, has called on the school to actively reduce the burden of proof required […]

Faculty Are Increasingly Skeptical about MOOCs

Two years after MOOCs grabbed higher-ed headlines and recession-battered students began calling for cheaper college options, what do professors think of online education? According to Inside Higher Ed’s 2014 survey of faculty attitudes on technology, they’re cautiously becoming more hopeful about its success, if education consists in conveying information. But they’re increasingly skeptical about its […]

The MIT Rape Study and Other Sloppy Surveys

The latest alarming numbers on campus sexual assault come from a Massachusetts Institute of Technology survey which supposedly shows that 17 percent of female undergraduates have been sexually assaulted during their time at the school. Writing in The Washington Post, columnist Catherine Rampell has invoked these findings as a rebuke to those who have criticized […]